by Countercurrents Collective, published on Countercurrents, December 20, 2021 Nice quick summary of what is in the report.  We should all read it. [jb] The U.S. military drastically undercounted civilian deaths caused by airstrikes in the Middle East since 2014, according to a New York Times investigation published Saturday. The New York Times reviewed a hidden Pentagon archive comprised of the military’s confidential […]

Press Release from Ban Killer Drones The Pentagon must be called upon by people around the world and by the U.S. Congress to make public all of the communications and logs, including communications with the White House, pertaining to the August 29, 2021 drone attack that killed 10 members of the Ahmadi family in Kabul, including seven children, say representatives […]

“Worse than a Crime”: Pentagon Inspector finds Kabul Drone Strike Killing 10 not a Violation of Law (!)

by Juan Cole, published on Informed Comment, November 6, 2021 Ann Arbor (Informed Comment) – Paul Handley of AFP reports that the US Air Force Inspector General, Lieutenant General Sami Said, found that a drone strike that mistakenly killed 10 civilian non-combatants, including 7 children, in Afghanistan on August 29 violated no laws, including the law of war. When Napoleon […]

by Saini published on NamNews Network, September 28, 2021 THE HAGUE, Sept 28 (NNN-AGENCIES) — The International Criminal Court prosecutor said he was seeking approval to resume a war crimes investigation of Afghanistan, focusing on the actions of the Taliban and the Islamic State Khorasan (ISIS-K) militia. A statement said the request was being made to the court’s judges in […]

“America’s Longest War” Is Not Over!

by Brian Terrell, September 8, 2021 On August 31, President Joseph Robinette Biden Jr. stepped up to the White House podium, squared his shoulders, looked the American public straight in the eye — and told them the biggest lie of his Presidency (so far). What he said was: “Last night in Kabul, the United States ended 20 years of war […]

by Saini, published on NNN (NAM News Network), September 28, 2021 THE HAGUE, Sept 28 (NNN-AGENCIES) — The International Criminal Court prosecutor said he was seeking approval to resume a war crimes investigation of Afghanistan, focusing on the actions of the Taliban and the Islamic State Khorasan (ISIS-K) militia. A statement said the request was being made to the court’s […]

The Names You Will Never Know

by Nick Turse, published on Counterpunch, September 26, 2021 …and the ones you will know because you will see them below.  I have decided to make this piece a memorial to the members of the Ahmadi family murdered by a U.S. Drone strike as U.S. troops left Afghanistan in disgrace.  You will find their pictures throughout this post.  [jb] As […]

by Dave Decamp, published on Antiwar.com, September 6, 2021 The US has vehemently defended its August 29th drone strike in Kabul that witnesses say killed 10 civilians, including seven children. But a preliminary military analysis of the bombing that was reported by The New York Times revealed that the Pentagon has no proof the vehicle it targeted was carrying explosives. […]

Daniel Hale’s Letter to the Judge

by Daniel Hale, published on the Sparrow Project, July 23, 2021 It is not a secret that I struggle to live with depression and post traumatic stress disorder. Both stem from my childhood experience growing up in a rural mountain community and were compounded by exposure to combat during military service. Depression is a constant. Though stress, particularly stress caused […] 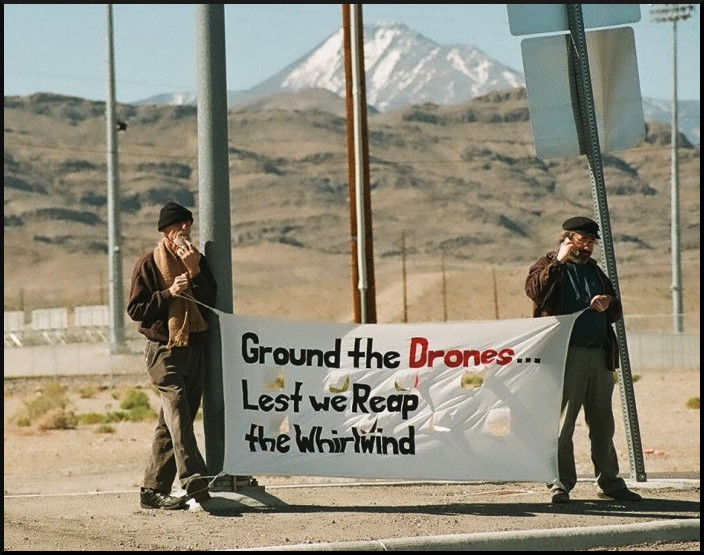 by Brian Terrell, published on Covert Action, May 10, 2021 A large campaign of civil disobedience is necessary to abolish one of the U.S. military’s monstrous creations The headline of the Yankton Daily Press & Dakotan on November 30, 2012, page one above the fold with my photo, read “Terrell: American Drone Strikes Must Stop.” I was served well by […]