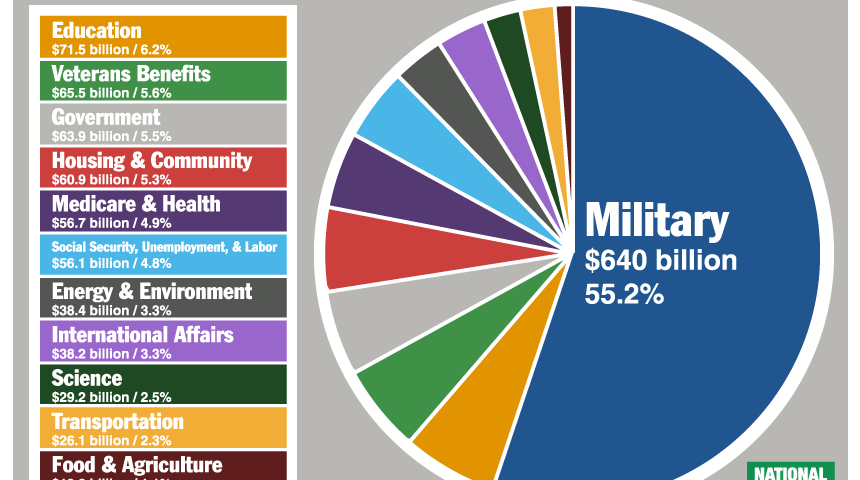 Does America Spend Enough on Defense?

In response to the Buffalo News’ interesting August 2 feature “Does America Spend Enough on Defense?”: We don’t need more military spending – we need less. Our military aggression makes us a target.

John Quigley rightly points out that we should be building bridges at home, rather than bombing bridges abroad and maintaining about 1,000 military bases worldwide. He observes that the average annual defense budget has risen, not fallen, since George W. Bush left office.

In opposition, James Jay Carafano claims that cuts to military spending will leave the US weaker than before 9/11: without continual increases in military spending, others will think we’re weak and attack us. However, Al-Qaida’s 9/11 attack was not caused by perceived weakness.

The USA spends $15 Billion more on its military than the next nine countries put together, per the International Institute for Strategic Studies, or more than 34% of the military spending for the entire world, per the Stockholm International Peace Research Institute, 2015.

What have we got to show for such spending?

The USA is also the major seller of arms worldwide, representing more than ¾ of all arms exports in 2011, per the NY Times. We sometimes arm both sides of a conflict, and not surprisingly are often attacked with weapons we provided, lately by Isis and Al-Qaida. (We are also #1 in guns per capita, with [per the UN Office of Drugs and Crime] an unbelievable 88.8 guns per 100 residents in 2012 – excluding arms held by the government!)

We are the only country that has used nuclear bombs (despite Japan’s imminent surrender), and we maintain our nuclear arsenal at great financial and environmental cost rather than pursuing nuclear disarmament. The treaty with Iran is the first recent serious attempt toward nuclear nonproliferation. Hopefully Congress will support the treaty with Iran. The accord prevents Iran from obtaining nuclear capabilities, and includes robust reporting and verification. Iran will benefit by the end of sanctions – as will U.S. businesses eager to enter that market. Diplomacy rather than military efforts make this a real victory for the U.S.

Such peaceful and just conflict resolution benefits all, and is much more effective in reducing violence. Let’s invest in life-sustaining efforts instead.