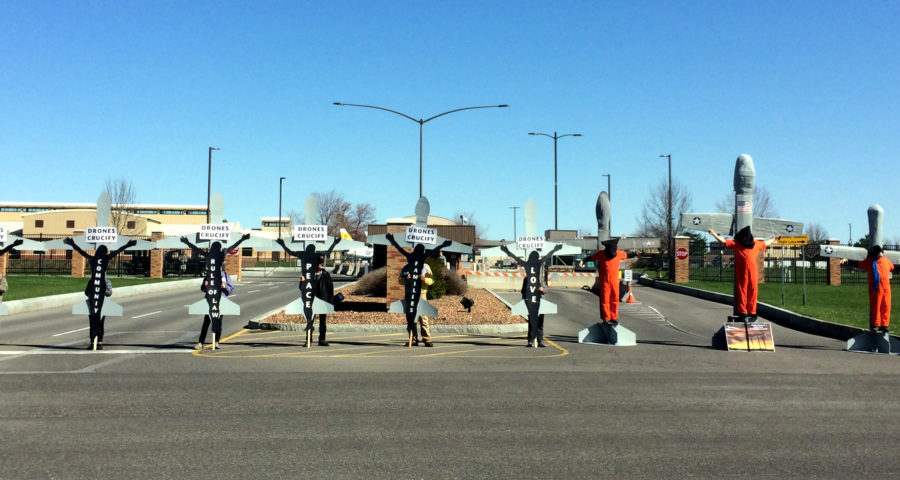 Good Friday Statement at Hancock Base

April 14, 2017 ~ Good Friday commemorates the crucifixion of Jesus Christ. Recognizing that 70% of our nation identify as Christian, we come to the gates of the Hancock drone base to make real the crucifixion today. As Jesus and others were crucified by the Roman Empire, drones are used by the U. S. Empire in a similar fashion. In Roman times, crosses loomed over a community to warn people that they could be killed whenever the Empire decided. So too, our drones fly over many countries threatening extrajudicial killings of whoever happens to be in the vicinity.

On this Good Friday, we recall Jesus’ call to love and nonviolence. We’re asking this air force base and this nation to turn away from a policy which amounts to a modern-day crucifixion. Let’s embrace Jesus call to build the Kingdom of God on Earth instead of killing suspected enemies and innocents, including children. In the process, we are crucifying Children, Families, Love, Peace, Community, Diplomacy, the Rule of Law, the US Constitution, the UN Charter, US Treaties and Due Process.

What if our country were constantly being spied upon by drones, with some of us killed by drones? What if many bystanders, including children, were killed in the process? If that were happening, we would hope that some people in that attacking country would speak up and try to stop the killing. We’re speaking up to try and stop the illegal and immoral drone attacks on countries against which Congress has not declared war.