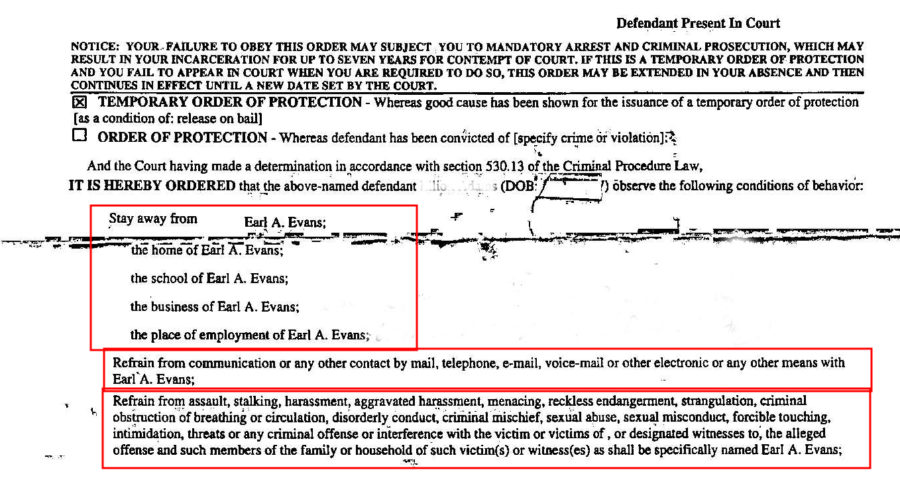 Jonathan Wallace has written an Amicus Brief for Mary Anne Grady Flores and submitted it to the Appeals Court on behalf of Upstate Drone Action.   Mary Anne, one of the first Hancock protesters to receive an Order of Protection, decided not to press her luck and participate in the next civil resistance action outside the base.   She did however come to the site of the protest and stand in the street photographing the participants.   As she walked back to her car, she was arrested for ‘violating’ the terms of her OOP.

Since she was in a public road well outside the locked gates of the base while merely photographing the protesters, Mary Anne was completely surprised by her arrest.   In her mind, she had followed what she believed was the intention of the OOP which was to refrain from protesting at Hancock Base and stay off base property.    She later learned that the public thoroughfare she was standing in  was leased by the base from the town, and subject to an easement allowing traffic to pass by.

At the trial, the Jury sided with a very aggressive prosecution that labeled her as an intruder in the affairs of the community and convicted her of not ‘staying away’ from the base.     Judge David Gideon wanted to ‘send a message’ to the protesters so he sentenced her to a year in jail.   By that time, the actual protesters she was photographing had already been acquitted of their Disorderly Conduct charges on the basis that there was no ‘intention’ to cause alarm or disruption.

Mary Anne’s case has been appealed and the appeal will be heard possibly in the fall.    This is the context in which Jonathan wrote the brief.   I have transcribed the introduction and summary portion of the brief in this post, but if you wish to read the whole brief you can click on the pdf link at the end of the post.  I have also linked a copy of her Order of Protection so you can see what Jonathan references in his document.

INTEREST OF THE AMICUS CURIAE

Upstate Drone Action respectfully submits this brief as amicus curiae in support of Appellant’s argument that her conviction for contempt of an Order of Protection (“OOP”) violated the First and Fourteenth Amendments. Upstate Drone Action is a grassroots coalition founded in 2010 which, in its
own words, “seeks to expose – both to the public and to Hancock Air Force Base personnel – the ongoing satellite-facilitated Reaper drone war crimes perpetrated in West Asia and the Middle East by the 174th Attack Wing of the New York State National Guard stationed at Syracuse’s Hancock Air Force base”.

Upstate Drone Action has organized and carried out a series of peaceful protests on the public street adjoining, and in the access road to, Hancock Air Force base. Numerous members of Upstate Drone Action have been arrested during these peaceful protests and charged with obstructing government action, a misdemeanor, and disorderly conduct and trespass violations, and some have gone to trial on these charges. Almost from the very outset, authorities in the Town of Dewitt, where the base is located, have begun issuing OOP’s under Criminal Procedure Law Section 530.13, using the same blank form which would be utilized to protect a battered spouse or frightened witness, issuing these in the name of the colonels commanding the base. Appellant Mary Ann Grady was arrested for violating her OOP at an Upstate Drone Action demonstration. Three other members of Upstate Drone Action currently face contempt charges for OOP violations, which have been adjourned by a DeWitt Town Court judge without date pending a decision on this appeal.

STATEMENT OF THE CASE AND SUMMARY OF ARGUMENT

Amicus maintains that the OOP issued to Appellant violates the First and Fourteenth Amendments, and the New York State Constitution, because: