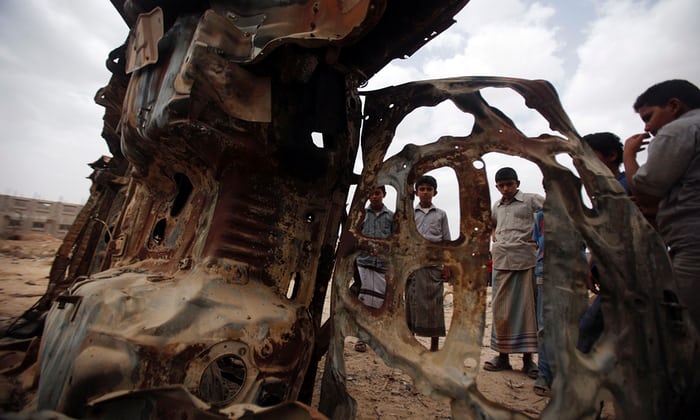 Header Image: Boys gather near the wreckage of car destroyed last year by a US drone air strike targeting suspected al-Qaida militants in Azan of the south-eastern Yemeni province of Shabwa. ( The car in which bin Ali’s relatives were murdered) Photograph: Khaled Abdullah/Reuters 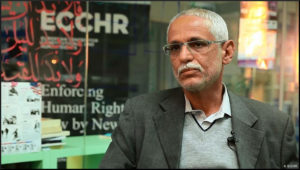 “No one will say publicly that an American drone killed Salem and Waleed, even though we all know it,” says Faisal bin Ali Jaber, pictured above. “This is unjust.”(Photo: Deutche Welle)

In the spring of 2014, Faisal bin Ali Jabar sued the German Government for the drone killing of his brother-in-law and nephew in Yemen.   Jabar’s brother-in-law was an imam, and very much opposed to the program of Al Qaeda in the Arabian Peninsula (AQAP).   When some low level AQAP militants came to town and threatened people in his congregation, he decided to meet with them and attempt to convince them to leave his people alone.   He took along a young man who was a local policeman, Jabar’s nephew.    The suit brought out some information, including the fact that there is a repeater on the US Ramstein Base that was necessary for all US drone strikes in the Middle East and North Africa.

Essentially, there is a trunk line from the US Drone Base in Creech Nevada to Ramstein in Germany, where the signal is received and forwarded to the satellite which provides the data streams that direct the drones.    On this basis, Mr. Jabar sued the German government for the wrongful death of his relatives.   The last I remember hearing was that the case was turned down, but the judge encouraged the plaintiff to appeal.   The case brought a light on the treaty obligations that Germany has been under since World War II that require it to refrain from war making and the hypocrisy of the Americans who have a base there that is necessary to bring about the slaughter of thousands, the majority of them innocent civilians.

The case raised a discussion of these issues in Germany, and Americans were informed, and participated to support the German peace movement in pressuring the German government to push back against their American benefactors who have become parasitic in this context and who are placing Germany in a contradiction with its own laws and the laws of the European Union as well as the constraints placed on it by the United Nations since World War II.   You can read more about this campaign and the legal issues in Germany on the site, Action Reports.

Faisal Ali Bin Jabar came to the United States to testify before Congress a few months later about the human cost of Drone strikes in Yemen where both targeted strikes and so called ‘signature’ strikes against people whose behavior is suspicious were both common at the time.   The strike against his relatives was a ‘Signature’ strike.   The three militants they went to meet were under observation due to their ‘suspicious’ pattern of activity and it seemed a propitious time to strike when a couple of more men would be taken out as well.   After that I didn’t hear more about Mr. Jabar’s case.

Background of Interim Events: the Saudi War on Yemen

In the spring of 2015, Saudi Arabia began bombing Yemen with assistance from the United States and the United Kingdom who have provided weapons, but also intelligence, guidance and in-air fueling for the US made jets Saudi pilots fly ever since.   Saudi Arabia formed a coalition with the United Arab Emirates (UAE) and other Gulf states and called in markers from Pakistan and Egypt,   and hired mercenary foot soldiers from around the world to lay waste to the impoverished and embattled country of Yemen.    The United States has not only assisted the Saudi ‘coalition’ in making war on Yemen over the last 2 years, but provided political cover for them at the United Nations and assisted in maintaining a siege on Yemen that is killing more people than the bombing.

AQAP, the original US target of drone bombs, has been empowered by the war.   When the war began, the US withdrew its diplomatic staff from Sana’a, and it also withdrew the personnel from the a military base they were using there, which was immediately taken over by AQAP,  an ally of the Saudi coalition, who now control significant territory in Yemen.   Meanwhile, the US continues to bomb AQAP with drones and other means, which puts it in a rather contradictory position as it is both supporting the Saudi aggression in Yemen, and attacking one of it’s affiliates. 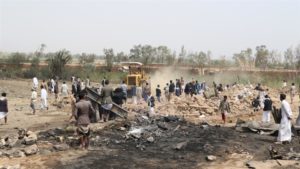 People gather as a bulldozer removes debris of a house to recover a missing woman at the site of a Saudi-led air strike on an outskirt of the northwestern city of Saada, Yemen August 4, 2017. REUTERS/Naif Rahma

It’s not a surprise that Mr. Jabar’s case has fallen off the radar.   From the very beginning of the war in early 2015, the Saudi coalition has bombed schools and hospitals, water purification plants and power plants, factories and farms and people’s homes.   The civilian infrastructure of the country is in ruins.    Civilians are starving to death and a cholera epidemic is raging.   Children are dying in significant numbers.   The statistics of injury and death are deeply underestimated.    Saada, the Houthi capital in the north of Yemen has been leveled, along with numerous towns and villages.

A family with a malnourished child is pictured in their home in Sanaa June 21, 2012. (Reuters/Mohamed al-Sayaghi)

We keep hearing that Yemen is on the brink of faming.   But it certainly appears that Yemen crossed that brink more than a year ago.   They are talking about 10,000 civilians dead from the war right now, but a Yemeni student in the US quoted in today’s Moon of Alabama blog says that since early 2015, more people have died from hunger and disease in Yemen than from the war. Of course, those people also died from the war.    In Key Facts About the Yemen War, published in June of 2016, Al Jazeera reported that

Both sides have been accused of killing civilians: the United Nations High Commissioner for Human Rights has estimated that Saudi-led coalition air strikes caused almost two-thirds of reported civilian deaths.

And then, of course, you have the mercenaries on the ground and the siege.   According to the article in Al Jazeera, there were 2,800 civilian deaths reported in Yemen in January of 2016, and 8,000 total.   If air strikes are the main killer, the proportion seems off.   There are lots of militias fighting in Yemen, but all the members were civilians when the war started, who were moved to act by the ongoing violence.   The Houthis were a force of a couple of thousand camped out in Sana’a, demonstrating against the government. 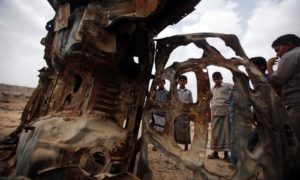 Boys gather near the wreckage of car destroyed last year by a US drone air strike targeting suspected al-Qaida militants in Azan of the south-eastern Yemeni province of Shabwa. Photograph: Khaled Abdullah/Reuters

So, I was surprised last week when I received a newsletter from Reprieve stating that Mr. Jabar’s Appeal of his wrongful death case against the US Government was heard last December.     Kathleen McLellan and Jesselynn Radack filed an Amicus Brief on behalf of whistle blowers Brandon Bryant, Lisa Ling and Cian Westmoreland, all involved in the Drone program prior to their leaving the military.  Apparently, the original lawsuit was adjudicated in 2015.   I found an article in the Guardian, but nothing in the US press on the subject.   Of course, nearly two years have passed and much has changed.   The Guardian focused on the human element: Yemeni man denied apology from US for drone strike that killed his family.  Jabar actually offered to drop if suit if President US President and Top Drone Barak Obama would offer condolences as he has to western victims of drone strikes.   This of course was not going to happen.

So, it turns out that the reason I heard about Mr. Jabar’s Appeal just now is that the case was heard in December of 2016, but the decision was presented in July of 2017.    The Judges who heard the appeal upheld the original court decision.   The decision was that the judiciary does not have the authority or the expertise to contradict a decision by the Executive with regard to war and peace.   So, in matters of ‘war and peace’, ‘checks and balances’ do not apply.   Therefore, despite the fact that all were sympathetic with the complainant and recognized the merit of the case itself, the court declined to decide it.

And so, this critical case was not only dismissed on questionable grounds, but it has been lost in the fog of an escalating war on a country that is no threat whatsoever to the United States or Saudi Arabia for that matter, a poor country whose people have been struggling for security, independence and some kind of democratic governance for decades.