When the Reapers Come Home

That was the statement from Department of Defense official Steve Pennington in the 2/13/12 LA Times, the day before the 2012 FAA Modernization and Reform Act was signed into law.

“We want a fully integrated environment.”

Fully integrated: meaning, no restrictions on military drones operating in the National Airspace (NAS) – Reapers, Predators, etc., occupying the same airspace as commercial/civil aircraft over our heads. The DoD has been trying to get this “routine” access for over 10 years. Read “Background: War on Terror” for some of the history leading up this point.

The 2012 FAA Act is how they are going to accomplish this.

How could this go unreported?
The Act directs the Administrator of the FAA to establish a testing program for the eventual integration of UAS, or drones, into the National Airspace System. This has been reported on extensively, as it applies to potential “civil” or commercial drone applications (Amazon package delivery, aerial photography, agricultural uses, etc.)

However, at every step leading up to this for the previous 11 years up to and including the Senate version of the Act, Congress and the DoD have primarily referred to the need to integrate “military” unmanned aircraft into the NAS. But the FAA is barred from regulating “military” aircraft. They are bound by federal statute to refer to them as “public” aircraft. So the final version of the Act conforms to the FAA language, and directs them to integrate “civil” (commercial) unmanned aircraft, and “public” (military) unmanned aircraft into the NAS.

Could this be why no one has reported this up to now? 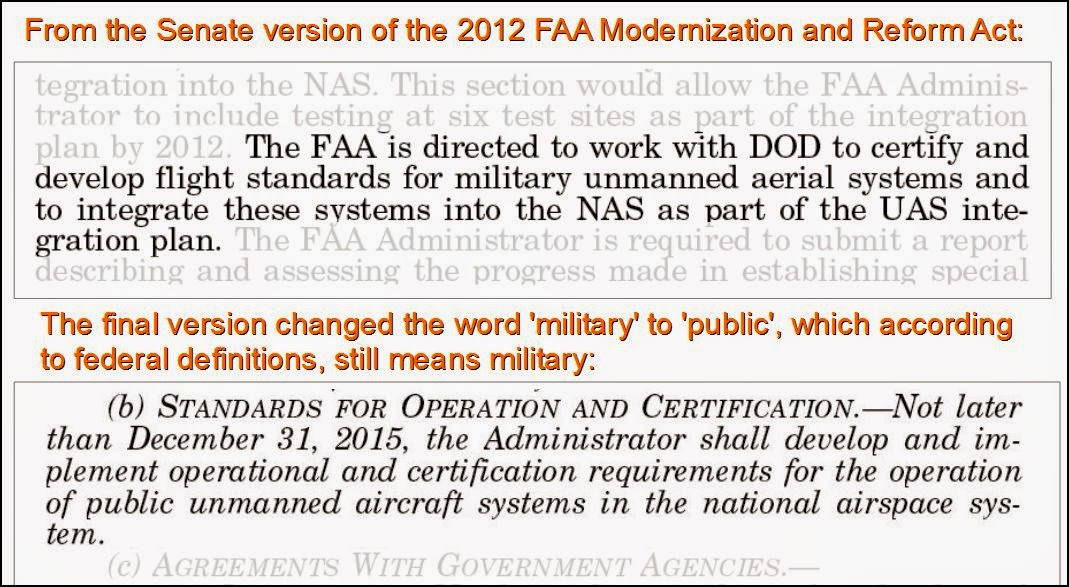 The FAA definition of “public aircraft” is spelled out here. Essentially, from Title 49 USC 40125: Qualifications for public aircraft status:

“(c)AIRCRAFT OWNED OR OPERATED BY THE ARMED FORCES”
Again, from the Senate version:
“(a) IN GENERAL- Within 1 year after the date of enactment of this Act, the Administrator shall develop a plan to accelerate the integration of unmanned aerial systems into the National Airspace System that–
(6) addresses both military and nonmilitary unmanned aerial system operations;”

From the House version:

(4) address both civil and public unmanned aircraft systems;
If the FAA and the DoD are preparing to open US domestic skies to military surveillance drones, it would have to involve the six designated UAS test sites set up by the FAA.
Read about those sites, the military and defense contractor personnel who are in charge of them, and the military bases they are operating at here.
Read about the “Gorgon Stare” city-wide Reaper drone surveillance package here.