Photos will be posted on our website & the video will be released shortly. 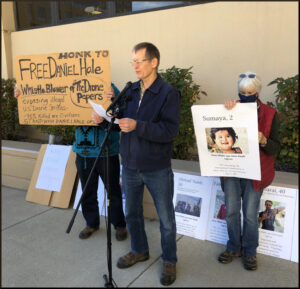 Mark Carver at the Mic with Ann Tiffany

We spread out ten pictures of the Amadhi family members who were murdered just two months ago, along a low wall outside the building, and held a brief press conference.  Eddie Rodriguez videotaped as four of us read a Statement that included BKD’s five demands. (video to be released soon).  Ed Kinane read the final statement questioning if the MQ-9 drone strike that killed the Ahmadi family originated from Hancock Airbase in Syracuse. Pilots are trained to maintain and execute drone strikes in Afghanistan with MQ-9 Reaper drones from Hancock AFB. Ed also spoke of our call for the pardon and release of drone pilot whistleblower, Daniel Hale, who is serving a four year sentence in prison for releasing “The Drone Papers” to The Intercept. 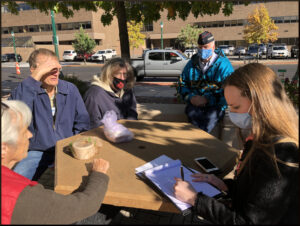 Mary Anne Grady Flores arranged to have Sen. Chuck Schumer’s Deputy Regional Director, Emily Cone, attend the press conference and meet with us after to discuss our concerns.  We met for 45 minutes at a table in the plaza.

Our group then drove to Hancock Base where three of us walked up to the guardhouse with four pictures of the murdered children clipped to a length of cedar siding and a sign, “ Who killed these children.”  We were met by two guards, who closed the gate as usual.  John read an anti-drone statement that was specific to the base and mentioned Daniel Hale. “We, members of the Upstate Drone Action Coalition and Ban Killer Drones come today to ask if pilots trained or deployed here participated in the killing of the Ahmadi family members.”  The guards seemed more open to John’s personal sharing as a veteran and our feelings about the injustice of all the

Ann Tiffany with photos of the Ahmadi family.

Greetings, We’re from the Upstate Drone Action Coalition. We come in peace to read a short statement.   The Ahmadi family — three adults and seven children — were killed in Kabul, Afghanistan, on August 29th, 2021, just two months ago, by an MQ9 Reaper drone.
For over a decade – right here at this base, the 174th Attack Wing of  Hancock AFB – Airforce members train MQ-9 Reaper drone pilots for aerial drone strikes in Afghanistan.
We, members of the Upstate Drone Action Coalition and Ban Killer Drones come today to ask if pilots trained or deployed here participated in the killing of the Ahmadi family members.
We’re here to give notice to everyone in the chain of command, including the Hancock drone pilots, as they bear responsibility and may yet be held accountable for murders such as these.
We are calling for the immediate release and pardon of drone pilot whistleblower, DANIEL HALE, now serving nearly four years in federal prison.
Mr. Hale’s crime: He had the courage to admit the truth in “the Drone Papers,” that within a 5 month period, 90% of drone victims were innocent.
We demand the immediate cessation of 174th’s role in that drone assassination campaign. We further demand an end to the U.S. drone assassination program from all other military bases here and abroad.
###