On August 29, after hours of surveillance on what it believed to be a vehicle containing an ISIS bomb, the U.S. military fired a drone strike on civilian driver Zemari Ahmadi in Kabul, Afghanistan. The military stated the strike may have killed three civilians, though reporting by the New York Times showed it killed 10, including seven children, of the Ahmadi family.

As the Times explained, “the people who rode with Mr. Ahmadi that day said that what the military interpreted as a series of suspicious moves was simply a normal day at work.” And while the military claimed a second explosion after the drone strike indicated that there were explosives in the vehicle, the Times found no evidence to suggest this.

Ban Killer Drones, a national network resisting the use of drone attacks, is calling for reparations to the Ahmadi family, saying thousands of others killed by U.S. drones deserve similar payments, which should be made under the oversight of Congress’ Tom Lantos Human Rights Commission.

“The $3 million U.S. payment to the family of Giovanni Lo Porto when he was killed by a U.S. drone in Pakistan in 2015 sets the minimum standard that the U.S. must meet in compensating families of civilians who are killed by U.S. drones,” said Nick Mottern of the Ban Killer Drones network.

“Our concern goes beyond the tragic deaths within the Ahmadi family to the thousands of victims of U.S. drone attacks,” said Brian Terrell, also a member of the Ban Killer Drones network, “most of whom were not those targeted and none of whom were found guilty in any court. Justice demands that compensation be paid to all their families.” 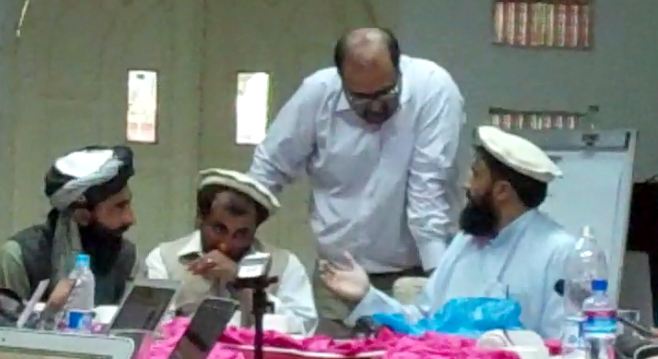 Photo of family members of victims of drone strikes in Pakistan, taken at a meeting in Islamabad in 2012, ~Judy Bello

“These reparations payments obviously cannot bring back these precious lives,” Mottern said, “but they can communicate a respectful recognition by the U.S. military of the widespread, devastating, unacceptable harm that is being inflicted by U.S. drone attacks, on individuals, families, and entire communities — communities that also must receive compensation.”

Ban Killer Drones has issued a list of demands concerning the U.S. military’s drone program and reparations to its victims:

1. An official apology by President Biden, as commander in chief of the U.S. military, to the Ahmadi family for the deaths of their family members.

2. Reparations of $3 million minimum for each of the 10 Ahmadi family members killed in the strike.

3. An immediate report from the Department of Defense detailing who in the chain of command was responsible for the drone attack on the Ahmadis. This includes the release of all communications and logs related to the attack from the White House down to the operator who pressed the button to launch the attack, and a report on whether and what charges are to be brought against those responsible for the killings.

4. That the Tom Lantos Human Rights Commission of the U.S. Congress:

1)  Investigate all U.S. drone attacks since 2001 pursuant to identifying all civilian and non-combatant victims;

2)  Oversee the disbursement of reparations to their families;

4)  Seek the appropriation of sufficient funds to compensate families of non-combatant drone attack victims at the level of $3 million for each victim;

5)  And  provide compensation to communities that have suffered U.S. drone attacks.

5. An immediate halt to all U.S. drone attacks and an end to U.S. plans and taxpayer support for weaponizing drones of all types.

The Ban Killer Drones network is comprised of concerned citizens, in local and national peace and justice organizations, many of them in communities in which there are killer drone control bases. Together they are organizing to achieve a United Nations conference to adopt and ratify an international treaty to ban weaponized drones and military and police drone surveillance.