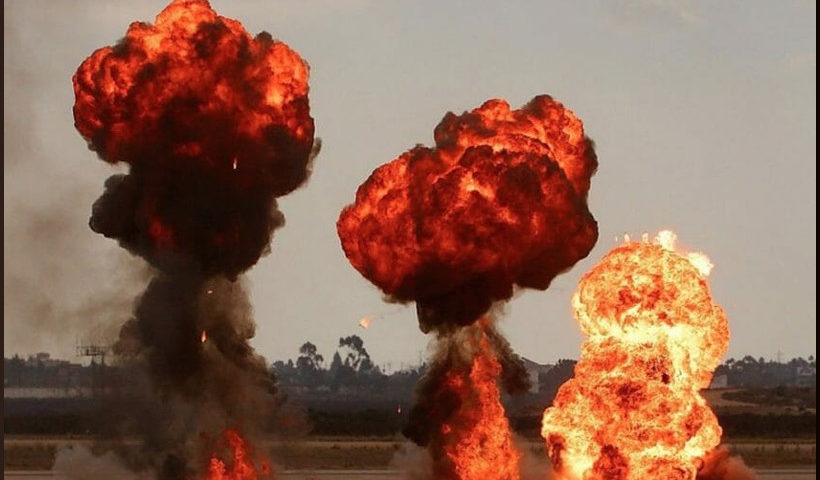 Trump’s Military Drops a Bomb Every 12 Minutes, and No One Is Talking About It

We live in a state of perpetual war, and we never feel it. While you get your gelato at the hip place where they put those cute little mint leaves on the side, someone is being bombed in your name. While you argue with the 17-year-old at the movie theater who gave you a small popcorn when you paid for a large, someone is being obliterated in your name. While we sleep and eat and make love and shield our eyes on a sunny day, someone’s home, family, life and body are being blown into a thousand pieces in our names.

The United States military drops an explosive with a strength you can hardly comprehend once every 12 minutes. And that’s odd, because we’re technically at war with—let me think—zero countries. So that should mean zero bombs are being dropped, right?

Hell no! You’ve made the common mistake of confusing our world with some sort of rational, cogent world in which our military-industrial complex is under control, the music industry is based on merit and talent, Legos have gently rounded edges (so when you step on them barefoot, it doesn’t feel like an armor-piercing bullet just shot straight up your sphincter), and humans are dealing with climate change like adults rather than burying our heads in the sand while trying to convince ourselves that the sand around our heads isn’t getting really, really hot.

You’re thinking of a rational world. We do not live there.

Instead, we live in a world where the Pentagon is completely and utterly out of control. A few weeks ago, I wrote about the $21 trillion (that’s not a typo) that has gone unaccounted for at the Pentagon. But I didn’t get into the number of bombs that ridiculous amount of money buys us. President George W. Bush’s military dropped 70,000 bombs on five countries. But of that outrageous number, only 57 of those bombs really upset the international community.

Because there were 57 strikes in Pakistan, Somalia and Yemen—countries the U.S. was neither at war with nor had ongoing conflicts with. And the world was kind of horrified. There was a lot of talk that went something like, “Wait a second. We’re bombing in countries outside of war zones? Is it possible that’s a slippery slope ending in us just bombing all the goddamn time? (Awkward pause.) … Nah. Whichever president follows Bush will be a normal adult person (with a functional brain stem of some sort) and will therefore stop this madness.”

We were so cute and naive back then, like a kitten when it’s first waking up in the morning.

The Bureau of Investigative Journalism reported that under President Barack Obama there were “563 strikes, largely by drones, that targeted Pakistan, Somalia and Yemen. …”

There was basically a media blackout while Obama was president. You could count on one hand the number of mainstream media reports on the Pentagon’s daily bombing campaigns under Obama. And even when the media did mention it, the underlying sentiment was, “Yeah, but look at how suave Obama is while he’s OK’ing endless destruction. He’s like the Steve McQueen of aerial death.”

And let’s take a moment to wipe away the idea that our “advanced weaponry” hits only the bad guys. As David DeGraw put it, “According to the C.I.A.’s own documents, the people on the ‘kill list,’ who were targeted for ‘death-by-drone,’ accounted for only 2% of the deaths caused by the drone strikes.”

Two percent. Really, Pentagon? You got a two on the test? You get five points just for spelling your name right.

You have to admit that’s impressively horrific. That puts Obama in a very elite group of Nobel Peace Prize winners who have killed that many innocent civilians. The reunions are mainly just him and Henry Kissinger wearing little hand-drawn name tags and munching on deviled eggs.

However, we now know that Donald Trump’s administration puts all previous presidents to shame. The Pentagon’s numbers show that during George W. Bush’s eight years he averaged 24 bombs dropped per day, which is 8,750 per year. Over the course of Obama’s time in office, his military dropped 34 bombs per day, 12,500 per year. And in Trump’s first year in office, he averaged 121 bombs dropped per day, for an annual total of 44,096.

Trump’s military dropped 44,000 bombs in his first year in office.

He has basically taken the gloves off the Pentagon, taken the leash off an already rabid dog. So the end result is a military that’s behaving like Lil Wayne crossed with Conor McGregor. You look away for one minute, look back, and are like, “What the fuck did you just do? I was gone for like, a second!”

Under Trump, five bombs are dropped per hour—every hour of every day. That averages out to a bomb every 12 minutes.

And which is more outrageous—the crazy amount of death and destruction we are creating around the world, or the fact that your mainstream corporate media basically NEVER investigates it? They talk about Trump’s flaws. They say he’s a racist, bulbous-headed, self-centered idiot (which is totally accurate)—but they don’t criticize the perpetual Amityville massacre our military perpetrates by dropping a bomb every 12 minutes, most of them killing 98 percent non-targets.

When you have a Department of War with a completely unaccountable budget—as we saw with the $21 trillion—and you have a president with no interest in overseeing how much death the Department of War is responsible for, then you end up dropping so many bombs that the Pentagon has reported we are running out of bombs.

Oh, dear God. If we run out of our bombs, then how will we stop all those innocent civilians from … farming? Think of all the goats that will be allowed to go about their days.

And, as with the $21 trillion, the theme seems to be “unaccountable.”

Journalist Witney Webb wrote in February, “Shockingly, more than 80 percent of those killed have never even been identified and the C.I.A.’s own documents have shown that they are not even aware of who they are killing—avoiding the issue of reporting civilian deaths simply by naming all those in the strike zone as enemy combatants.”

This is about a runaway military-industrial complex that our ruling elite are more than happy to let loose. Almost no one in Congress or the presidency tries to restrain our 121 bombs a day. Almost no one in a mainstream outlet tries to get people to care about this.

Recently, the hashtag #21Trillion for the unaccounted Pentagon money has gained some traction. Let’s get another one started: #121BombsADay.

Do you know where they’re hitting? Who they’re murdering? Why? One hundred and twenty-one bombs a day rip apart the lives of families a world away—in your name and my name and the name of the kid doling out the wrong size popcorn at the movie theater.

We are a rogue nation with a rogue military and a completely unaccountable ruling elite. The government and military you and I support by being a part of this society are murdering people every 12 minutes, and in response, there’s nothing but a ghostly silence. It is beneath us as a people and a species to give this topic nothing but silence. It is a crime against humanity.

Truthdig is running a reader-funded project to document the Poor People’s Campaign. Please help us by making a donation.

Lee Camp is an American stand-up comedian, writer, actor and activist. Camp is the host of the weekly comedy news TV show “Redacted Tonight With Lee Camp” on RT America. He is a former comedy writer for the Onion and the Huffington Post and has been a touring stand-up comic for 20 years.    If you think this column is important, please share it. Also, check out Lee Camp’s weekly TV show “Redacted Tonight” and weekly podcast “Common Censored.”