In the Pentagon’s 9/17 briefing, General McKenzie admitted the 8/29 US drone strike in Kabul that killed Zemari Ahmadi and nine family members was a “tragic mistake.” We are grateful for their recognition of the mistake. General McKenzie also confirmed that the recent DoD investigation into this strike was unable to establish any connection between ISIS-K and Zemari, his relatives, his Nutrition & Education International (NEI) colleagues, and NEI’s Kabul compound. We appreciate that these false accusations have finally been cleared.

The General’s statement confirms what was previously reported in the media and what NEI has known all along. We are grateful that the media coverage has been proven accurate and that Zemari’s honorable name can be restored. NEI thanks the in-depth investigative reporting by the Los Angeles Times, New York Times, Washington Post, CNN, ABC, CBS, NPR, Associated Press, as well as many other regional news outlets for bringing these facts to light.

We are pleased that the Department of Defense is exploring ex gratis payments to Zemari’s remaining relatives and others involved in this unfortunate incident. General McKenzie says this will be difficult as the DoD has no presence on the ground. NEI is offering to be the DoD’s main point of contact with Zemari’s family and NEI’s Afghan colleagues through its Kabul office. However, we are still waiting to be contacted by the DoD to help facilitate this process. 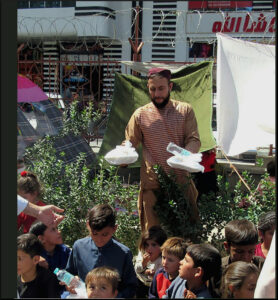 At this point, NEI’s primary concern is for the safety and welfare of Zemari’s remaining relatives in Kabul. Although General McKenzie delivered a general apology for this drone strike, NEI hopes the DoD will also apologize directly to Zemari’s remaining relatives. We hope that lifetime financial support will be provided to Zemari’s wife and daughter as it will be impossible for them to survive without Zemari and his brothers in Taliban-controlled Afghanistan. We also hope the DoD will expedite processing of P2/SIV visas for Zemari’s relatives, as well as provide resettlement support.

NEI is also concerned for the safety of its remaining Afghan colleagues who are now branded as ISIS terrorists. We are hoping the DOD will directly apologize to these colleagues, expedite the processing of their P2/SIV visas, and provide resettlement support.

* This is what they say, whether it is fully in alignment with our stance is not the point.  They are standing by the Ahmadi family to the best of their ability.

In Honor of Zemari Ahmadi, NEI will Continue on in its Vision and Humanitarian Efforts

Due to unsettling recent events, many of our soy farmers, especially in the Northern provinces, have fled their homes to seek refuge in Kabul. These internally displaced refugees, primarily women and children, are suffering from a lack of food, water, and other necessities. To honor Zemari, NEI will continue to work towards eradicating protein-energy malnutrition in Afghanistan. (Zemari Ahmadi distributing soy-based meals in Kabul, Afghanistan, August 2021.)

Veteran Doug Rokke produces a radio show called the Warrior Connection that speaks to soldiers about real issues that affect their lives and well being. Judy Bello and Ed Kinane joined the program to talk about the ways in which military drones are used to violate international law, and the fact that the pilots are put in a position where they subject to severe ptsd, working as executioners at the bottom of a kill-chain with military bosses at the top. Listen to Judy Bello and Ed Kinane talk to Doug Rokke about military drones, drone pilots and international law on “The Warrior Connection” radio show: