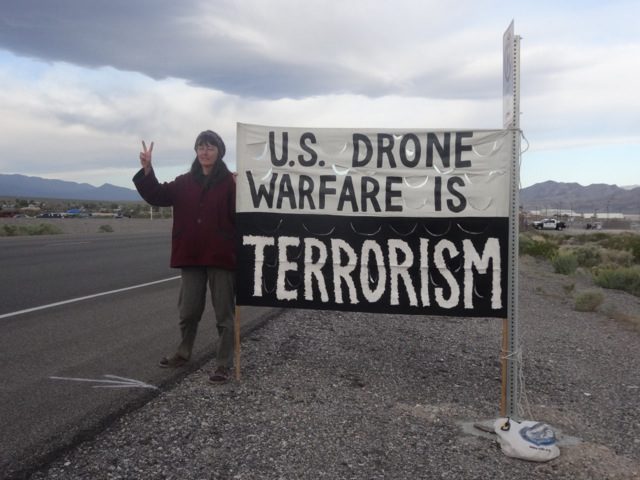 SHUT DOWN CREECH- A Success!

25 Activists Arrested in Two days of Nonviolent Blockades at Gates to Creech AFB;
Activists from over 20 states participated in week-long Mass Mobilization to End Drone Warfare

2- Edited shorts from the action:
http://www.smallworldradio.net/DN.mov

Anti-drone protesters executed waves of multiple non-violent peaceful actions at Creech Air Force Base throughout the morning last Friday, April 1, with the intent of interrupting the drone killing activities that take place there. Creech AFB, in southern Nevada, is the primary Command Center for the CIA’s and President Obama’s Drone Assassination program. At the most heavily used eastern gate, a total of 13 people were arrested in 4 separate actions. After military personnel re-opened the main base gate in the later morning after the 1st action there, three more waves of blockades occurred. The 3rd and 4th waves breeched a barricade near the gate and continued to block the road, ultimately stalling gate operations for nearly an hour totally, counting all actions at that gate. Another 4 were arrested at a 2nd gate. 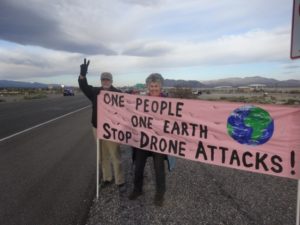 The first incident at the eastern gate occurred at approximately 7:00 AM when a group of six children and eight adults all dressed as angels, performed a mock drone attack on a funeral. The activists were demonstrating the gruesome U.S. practice of firing drone missiles into funerals for victims previously killed by U.S. drone attacks, with hopes that militants might also be killed. A ballerina led the procession, laying red roses on the entry road of the main gate, followed by the other children carrying a casket. The funeral procession was interrupted by a simulated drone attack that killed and injured many of the mourners. Ultimately seven adults were arrested after they refused to leave the roadway after a 5 minute warning.

At approximately the same time, actions took place at the other two base gates, leading to more arrests. The blockade at the 2nd gate focused on the criminal aspects of the U.S. drone assassination program. Activists stretched yellow crime scene tape around the base sign and across the entrance to the gate, preventing vehicles from entering. One protester laid across the roadway to portray a drone victim. And at the seldom used most western gate a small group held a silent meditation vigil for peace. Activists successfully delayed Air Force personnel (and presumably some drone pilots and technicians), from entering the base throughout the morning. 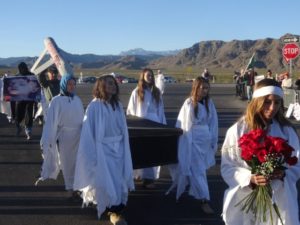 “Many Creech personnel arrived to the base before the normal 6-8am rush hour on Friday, presumably to avoid the protest. Activists who participated in this collective effort consider even that a success because the protest is having a direct impact on daily drone operations. These sustained actions are forcing the military to change their daily routines, and potentially stimulating more discussion about the drone policies in question and the growing national opposition to drone killing,” says Toby Blomé, one of the organizers. “We deeply hope that our voices will one day soon be heard, and the expanding use of these deadly and destabilizing weapons against the most vulnerable people in the world will cease.”

On Thursday, the day before Friday’s gate blockades, 8 activists, including 7 veterans were arrested in a earlier blockade at the heavily used eastern gate, blocking morning traffic as well. 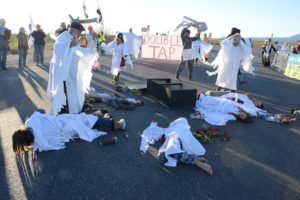 The two days of actions were part of a week-long protest at the base, culminating in a total of 25 arrests during the 2nd Annual National Mass Mobilization against Drone Warfare known as SHUT DOWN CREECH. Activists from over 20 states converged at “Camp Justice,” the peace camp directly across from Creech AFB, for daily rush hour vigils,
nonviolence training workshops, and strategizing meetings to prepare for these nonviolent blockades to impede drone killing.

These activities were done to highlight the Obama administration’s drone killing program that leads to many civilian deaths and violates international law. 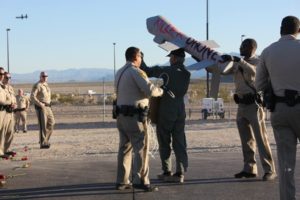