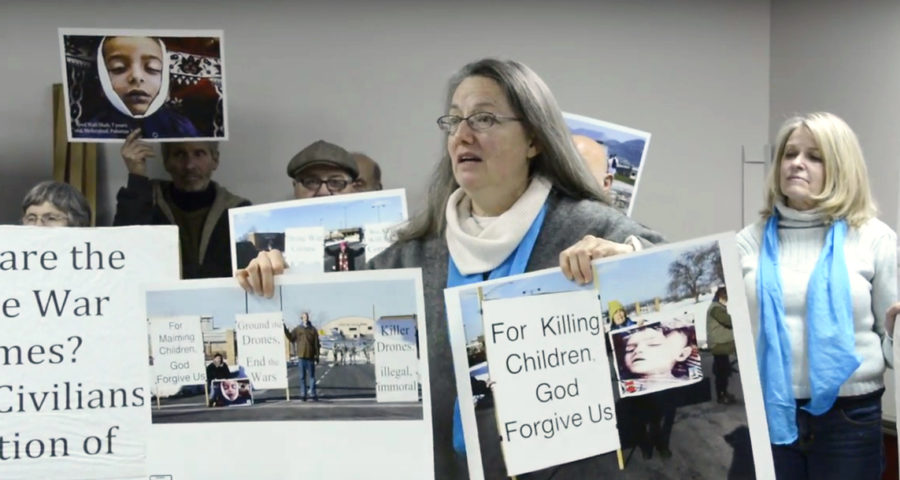 On January 19, 2016 I was remanded after a county court decision upheld a lower court verdict that I was guilty of violating the terms of an order of protection while photographing 8 Catholic drone protestors at Hancock Air force Base. Orders of protection were originally created to protect domestic violence victims and witnesses who might be subject to intimidation.

A month later while in jail I realized that Friday, Feb. 19 was important to me for four reasons. First, it was the seventh anniversary of my brother-in-law Peter DeMott’s sudden passing, leaving my widowed sister Ellen with four daughters to raise. Peter was a rock in our family and is sorely missed. We miss his energy, his wit, his deep bass radio voice, his random acts of kindness, his recitation of poetry, his mixing hot sauce with all his food. We miss his tireless efforts of putting his body at many gates, or climbing over fences or driving into military bases or witnessing at corporate military contractors’ facilities like Lockheed Martin, to end the madness of the never ending racist colonial wars of the U.S. empire. I hold Ellen, the tireless organizer of anti-killer-drone actions at Hancock Airbase, and each of their gifted daughters in prayer and in love.

Second, on that Friday, our 88-year-old mom, Teresa Grady, was officially accepted into Hospice. This past December, mom broke her hip and has declined since then. My siblings and I have been blessed caring for her 24/7 in her home for almost two years. It’s been a struggle since January 19, when I entered jail, especially as she nears her final days. My mother, along with my dad taught us that our faith meant we were supposed to stand up for human rights and justice. I learned that the jail might provide a death bed visit. First, they told me I had to prove that mom is my mother by getting my birth certificate. My counselor, Ms. Kash, has to handle a caseload of about 140 cases. Nevertheless, doing the best she could, she responded to my request to speak about mom’s decline, coming to the busy hub of the Pod – the guard desk – instead of the counselor’s office two feet away respecting confidentiality or sensitivity to the situation. The counselor asked me

“What’s your mom’s name and her doctor’s name? “What’s your mom’s date of birth where is she? Who’s caring for her? When I explained that Mon is being cared for at home by the family she responded. “Oh, that’s going to be a problem! It’s a security risk. You can’t have any family members with you while you’re there.” I said, “Mom can’t be left alone. I’ll be in shackles!”

Some other sergeants said it’s highly unlikely they would let me go to the house. Whether I stole a band aid, murdered someone, or photographed non-violent drone protesters, my transport guards would treat me the same.

Within the jail, there are different security levels designated to us inmates, but it doesn’t apply as we leave the prison walls.

This past Friday, Feb. 25, I was surprised by the jail authorities announcing they were taking me to see mom at home! I couldn’t believe it! I couldn’t tell anyone ahead of time. When the unmarked car pulled up by mom’s house Clare, who was on duty for mom, noticed us and ran in to tell mom, who was in the living room in her hospital bed. When we entered the house Clare was jumping up and down with tears streaming down her cheeks. The two officers informed her that she couldn’t call anyone or the half-hour visit would be over. I walked, shackled, wrists to waist and ankles, to be at mom’s side, leaning over her to kiss her big smiling face. I told her over and over that I loved her, my tears wetting her soft cheeks. I asked if she was in any pain. “No, I’m not in pain. I’m o.k.” She kept smiling and fell asleep. What a precious, blessed moment. Mom slept through the rest of the visit. We left Clare with mom and drove back to Jamesville in brilliant sunshine passing Lake Cayuga in gratitude, marveling at all of creation and in thanksgiving for mom’s life.

This situation reminds me of when Peter was in federal prison in Brooklyn. Before the sentencing of the St. Patrick’s Four, Peter and Ellen had been caring for his brother, Father Steve DeMott, who died two months after Peter’s sentencing.

The prison officials wouldn’t allow Peter to come 45 minutes north of New York City to the funeral in Maryknoll, New York. During this Lent we remember Uncle Steve’s passing, on March 30, 2006, and all the loving care that fell on Ellen’s shoulders till Steve passed.

A few weeks ago, the mother of one of the women in my pod, 19-year-old Clairrisa, died on a Wednesday of a heroin overdose. Clairissa only learned on Saturday that her mom had died. While shackled and in an empty funeral home she was allowed to spend one half hour with her mom’s body. She wasn’t allowed to be at the funeral. The New York State Department of Correction rules and regulations state that inmates have the right to both a death bed visit and to be at the funeral dependent upon the discretion of the jail or prison officials.

And who is in prison? The poor! Disproportionately, people of color! Who isn’t in jail? You don’t see the bankers who pulled down our economy in 2008! You don’t see the mortgage company swindlers who stole millions from poor and hardworking people. You don’t see those committing war crimes — those who have killed with drones and Hellfire missiles sent from U.S. air bases, nor those who gave them their orders. You don’t see the officials who poisoned the water in Flint, Michigan or the corporate executives who kill people with their unsafe products. You don’t see the cops who murder unarmed black men, women, teenagers and children.

Thirdly, on Friday, February 19, my appeal was submitted to the New York State Court of Appeals, the highest court in the state by my attorney Lance Salisbury. Lance also submitted a request that I be released on bail pending the decision on whether the court will take my case. If the court decides in a month that it won’t take the case, I return to Jamesville to finish my six months’ sentence. I’ve witnessed many of the women anxiously awaiting court or jail administrators’ decisions of whether or not, or when, they’d be released. Going in and out of prisons is not a simple matter. It takes a tremendous amount of energy to get in and get acclimated each time.

The appeal contends that you can’t ask for an order of protection on behalf of a military base. The order must be given on behalf of a victim or a witness. A separate appeal was submitted by Attorney Kathy Manley on behalf of 13 of us (originally the Hancock 17) addressing the same issues of the improper application of the orders of protection.

And finally, the fourth reason, this day is special is the very good news for both drone resisters and fracktivists that attorney Jonathan Wallace, who has been successfully defending many of the Hancock resisters has now proposed legislation to limit the scope of these orders so they do not apply to peaceful protestors. This legislation would exempt military and corporate personnel in New York State from using the orders of protection to deprive people of their First Amendment rights. The proposed legislation is as follows:

“Nothing herein contained shall be construed to authorize issuance of a temporary order of protection or order of protection, designating as a “victim” or “witness” any   federal, state or local government employee (including serving or reserve members of the military or members of any police force), or any corporate employee, against any individual arrested at a demonstration or protest against the employer of such victim or witness, in the absence of an actual or threatened act of physical violence, or a true threat issued, by such individual against such victim or witness.”

We hope to have a New York State legislator to propose this change in the law and a statewide petition for you to sign and circulate encouraging our legislators to support the bill when it is ready for a vote.

Again, I’d like to thank all of you who’ve sent great letters and cards lifting my spirits each morning. Even the guards laugh at some of the jokes you’ve sent especially Scott Schaeffer Deffy. It is so wonderful to feel the waves of love through your letters, poems, art work, etc. I’m thrilled with great hope when I receive your letters telling me of actions you take for justice’s sake combatting the triples of militarism, racism and economic exploitation. My friend Russell Rickford calls these the 3 w’s – war, wealth inequality and white supremacy.

I’m especially moved by the love and motivation expressed by young people hearing of my jail witness, like my California friend Sequoia Cohen. Sequoia is a student at Sierra Nevada College in Lake Tahoe where she is organizing 3 events to raise awareness of drone warfare and its consequences. Two whistleblower drone pilots, Cian Westmoreland and Stephen Lewis, have accepted her invitation to speak. Soon after, students and community members will join the “Shut Down Creech Air Force Base” rally, at the base, outside of Las Vegas, Nevada. Since 2005 this facility has been the place from which remotely controlled drones take off on killing missions for Afghanistan, Pakistan and Iraq. Many of those killed are civilians.

Go Sequoia! This is a fine example of the 3 A’s, awareness, acceptance, and action.

On March 30th at the University of Nevada there will be a symposium titled “Inside Drone Warfare: Perspectives of Whistleblowers, Families of Drone Victims and Their Lawyers.” The participants will also go to Creech Air Force base to join the protest there. For more information go to http://www.knowdrones.com/.

You are invited to be part of the Creech AFB protest, joining with peace activists from the Northeast, including a number from the Syracuse area.

I send you my greetings and thanks to you all and to the ever widening awareness and embracing of the beloved community.

To make a donation

–Donations will be accepted at the GoFundMe page: https://www.gofundme.com/bjmk9gf8. They take 5% of the donation.

To write to Mary Anne

–Put your return address in the body of your letter or in your card; envelopes are removed before Mary Anne receives correspondence.

Please Get Involved in the Resistance to Drones: