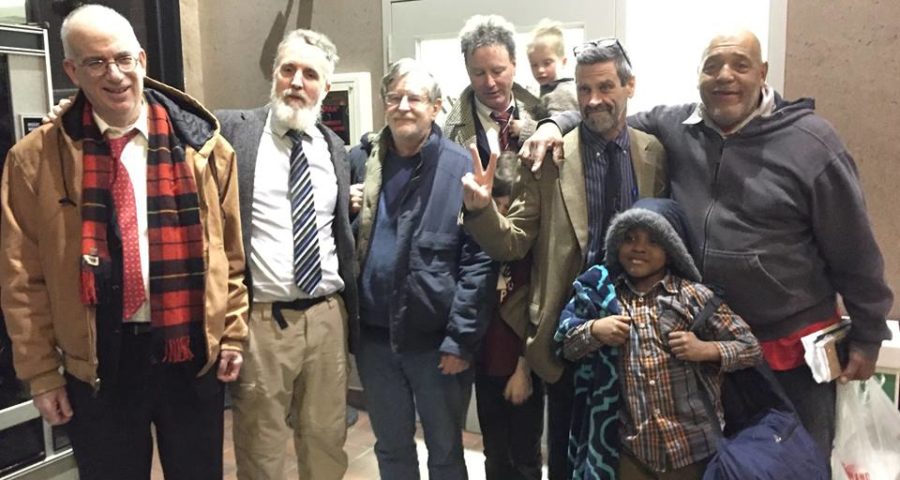 Our three-day Hancock trial in De Witt ended around midnight Thursday (3/2) and, exhausted, we scattered to the winds — some of us with long trips home.   Hence only minimal de-briefing or analysis. but here I’ll mention some of what I think are relevant factors in our acquittals.

~ First, obviously our cause is essential — not that that usually guarantees anti-drone activists victories in court….

~ One of our four defendants (JR) is African American with Native American ancestry.

~  The trial began last fall, but – at our insistence — was postponed til February 28 in order to get a new jury pool that wasn’t drawn only from the almost-lily white suburb of De Witt. our sense was that this time we got a sympathetic jury (mostly women) – perhaps drawn from a population newly awakened to the trump horror.

~  We also were blessed with two dedicated, political, savvy pro bono attorneys  (JW, DI) who have made multiple trips from afar (Long Island and Buffalo) to defend us in previous Hancock drone trials — they knew us, the issue, the charges and the judge (DG).  They were skilled in voir dire; their presence served as a check on an unfriendly judge.  The judge knows that, given our skillful legal support, abridgements of our rights might well be reversed on appeal.

~  The defendants are seasoned activists, each having been tried before in the De Witt court (as well as in other courts for other issues over the years).  Our goal was not necessarily to “win” or to avoid prison, but rather to put weaponized drones on trial.  Maybe our action and our defense radiated a certain integrity.

~  Three of the defendants (JR, DB, BH) went pro se; this gave our defense added flexibility and allowed the jury to see us as human beings. one of us (EK), who usually goes pro se, deliberately allowed  JW to represent him, which allowed that attorney to play key roles in the defense.

~  The defendants acted and spoke more or less with unanimity both during the trial and during our planning sessions before each trial session.

~  Although Hancock AFB and the town of De Witt are in Greater Syracuse, local media and even many local liberal activists — being in denial about how pivotal militarism and the pentagon budget are to the issues they work on — pretty much ignore our coalition’s scrupulously nonviolent and protracted (since 2010) civil resistance campaign. Nonetheless we got valuable support from other locals providing food and lodging  to sustain the defense.

~  I can single out here such support, typical of all our trials, of Friends of Dorothy, the local catholic worker house. [in previous trials another catholic worker house, Slocum House, has played a key hospitality role…and we expect it will continue to do so in the future. Also, former Hancock Defendants (AT, RK) provided key lodging and logistical support.

~  While no mainstream media attended the trial (despite our pre-trial press releases), we had our own videographers (CB, EG, ER) who will be getting out footage of opening and closing statements.  We were also fortunate in having our videographers (JA, CB, ER) on hand on march 19, 2015, when we did our “big books” action. they soon circulated footage on YouTube. this was helpful in court, showing not only our “books”, but our obviously un-disorderly deportment throughout the action and the arrest.

~  Each evening of the trial there were dozens of supporters. they came from NYC, Ithaca, Buffalo,  Albany,  Rochester, New England and points in between.   The jury might well have been favorably impressed by the community there on our behalf.    not to mention the presence in court of JR’s six-year old grandson and DB’s two youngsters – all cute as a button.

~ A word about the prosecutor: unlike some of the past De Witt prosecutors,  ADA Albert played fair.   He indulged in neither cheap tricks nor pandering rhetoric, nor was he obstructionist or hostile.  He even allowed us to show the jury ten oversize color photos of the “big books” action and of victims and relatives of drone victims.

~ ADA Albert’s only witness was Hancock Master Sergeant Ramsey who has been a prosecution witness at probably all of our trials.  Ramsey seems to be a pretty straight shooter; we’ve remained on good terms with him over the years.  Even after he testifies, he generally stays to watch the rest of our trial.  Who knows?  Maybe this career military man has been able to hear our testimony.

~ Others were arrested with us on march 19, 2015. but JO and BR, with the additional charge of violating their Order of Protection, a bogus misdemeanor, still await a trial date. it’ll be interesting to see if this jury’s verdict will dispose the DA and Hancock to drop that charge.  Their next court hearing is march 9.