Hancock Solidarity Vigil to Close the US Drone Base in Germany, Ramstein 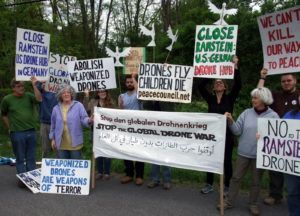 Report Back From: Carol Baum of the Syracuse Peace Council and the Upstate Coalition to Ground the Drones and End the Wars

Just wanted to let you know that today (May 21) we held a solidarity vigil to close the US Drone Base in Germany, Ramstein. We stood outside Hancock Air Base (in Syracuse), getting some (but not a lot of) media attention, but we did get a lot of car honks of support (but not from the cars coming out of the base).

If you haven’t planned one yet, please consider it – we need to stand in solidarity with the German activists trying to get Ramstein closed down. Please note – our translation of “Stop the Global Drone War” probably should have been Stoppt den US-Drohnen-Krieg via Ramstein (this is the slogan being used in Germany, but we found out about it too late).

Solidarity Vigil to Close Ramstein: US Drone Base in Germany
Thursday, May 21 from 4:15-5:15 pm

On Thursday, May 21 from 4:15-5:15 pm, the Syracuse Peace Council is sponsoring a vigil to close Ramstein, a US military base in Germany. The vigil, which is part of our weekly Peace Outreaches, will be across the street from the main entrance of Hancock Air Base at 6001 E. Molloy Rd., Mattydale.

Ramstein Base, one of the largest U.S. military bases outside the U.S., is the site of a satellite relay station that plays a key role in the communication between drone operators here in the U.S. and their drones abroad. The importance of the Ramstein base to the U.S. drone war program cannot be overstated. Signals from drone operators in the U.S. are sent via transatlantic fiber optic cable to Ramstein, where the signal is bounced to a satellite that connects to drones in the Middle East and Africa.

German peace groups have put out a call to U.S. peace groups for solidarity actions to Stoppt den US-Drohnen-Krieg via Ramstein (Stop U.S. Drone Warfare Via Ramstein). This vigil is timed to support a lawsuit filed by Reprieve and the European Center for Constitutional and Human Rights against the German government on behalf of the bin Ali Jaber family, who lost two members to a drone strike in Yemen. The case will begin with a hearing on May 27 before the high administrative court in Cologne, Germany. The suit demands that the German government “take legal and political responsibility for the U.S. drone was in Yemen” and “forbid use of the Satellite Relay Station in Ramstein.”

For more information see “Germany is the Tell-Tale Heart of America’s Drone War” by Jeremy Scahill and an interview with Andreas Schuller, the lead attorney on the case.