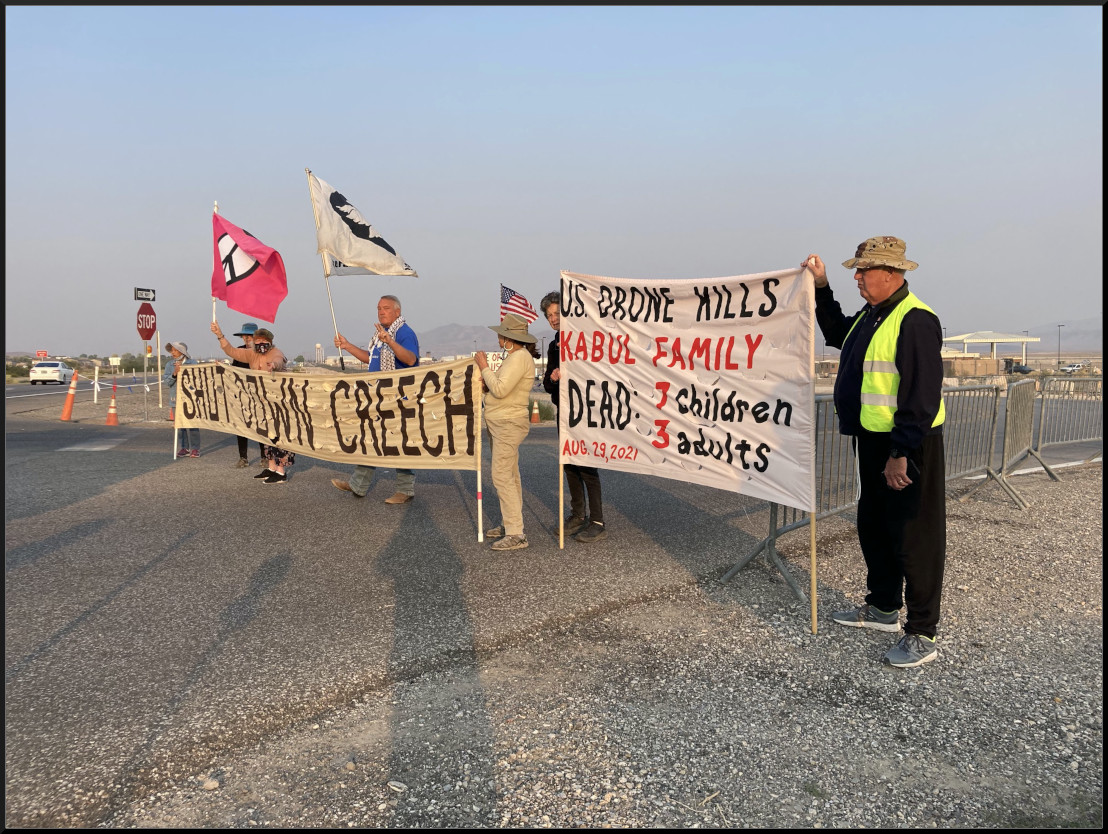 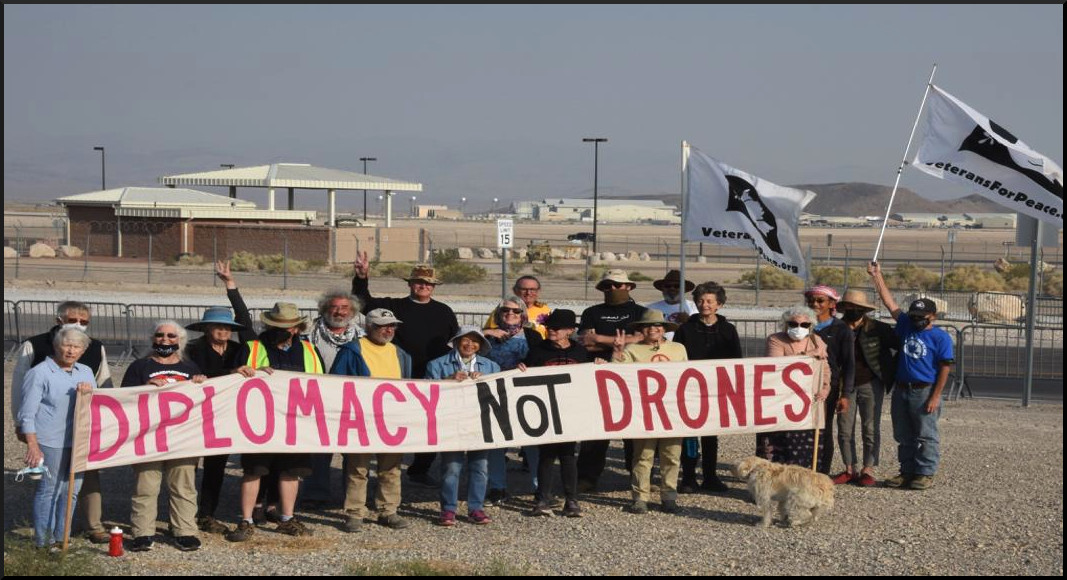 From September 26 to October 2, 2021, about 30 protesters from 12 states gathered in the desert outside Creech AFB killer drone control center north of Las Vegas, NV to engage in calls to conscience and a blockade intended to end the U.S. killer drone program at Creech and worldwide. These Shut Down Creech (SDC) actions have been held over the last 12 years at what is viewed as the foremost center for U.S. drone killing and the training of drone operators.

From September 16 to Oct. 2, members of the Ban Killer Drones network in eight cities and towns held actions in solidarity with those at Creech. This is the first time that such coordinated solidarity actions have been held.

Here are reports on all these events.

2021 SDC was a very unusual, important event not only because of the effectiveness of the vigils and blockades at the drone base, but because the SDC group, for the first time, carried their action into nearby, downtown Las Vegas and because, faced with a COVID-related disagreement, they were willing to undertake an extended process of respectful conversation to come to a place of agreement that enabled them to carry forward with unified, powerful action. It is also the first time that SDC, inspired by Veterans For Peace, handed out donuts to drivers headed toward the base.

Attached is a highly detailed, extremely educational report on 2021 SDC by Eleanor Levine, one of the chief organizers.

In addition, here is a link to another outstanding report on the event by Veterans For Peace, which includes a large, inspiring file of photos on the event. Of particular interest in this report is the special effort that was made to reach out to drone operators.

And, here is a report that appeared in the Las Vegas Sun, which also includes a photo file.

On September 16th, protesters connected with the Western New York Peace Center and Veterans For Peace protested the killing of 10 members of the Ahmadi family in Kabul on August 29, 2021, at the Niagara Falls Air National Guard base, the home of the 107th Attack Wing, the killer drone control unit.

Here is a press report and a Facebook recording of the action:

An SDC solidarity vigil was held on Sept. 21st at Davis-Monthan Air Force Base in Tucson, AZ. In the background is the Arizona Air National Gard headquarters and killer drone command modules. MQ-9 Reaper killer drones are controlled by the 214th Attack Group (“Black Sheep”), 162nd Wing, of the Arizona Air National Guard., located at Davis-Monthan. 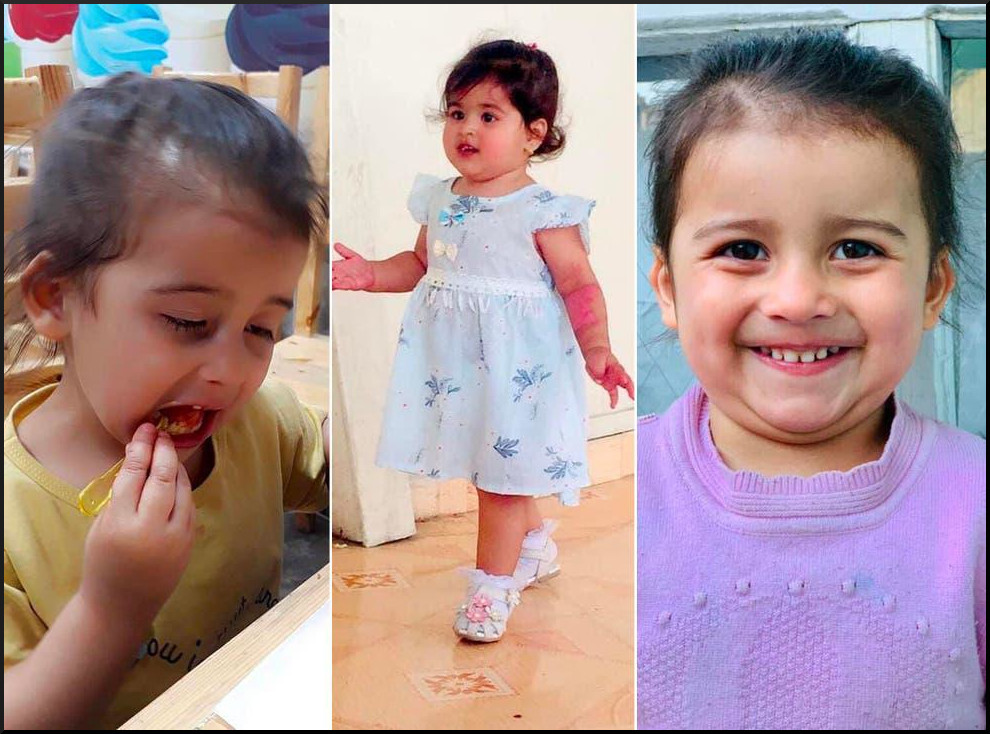 On July 20, 2021, Kim Mathews participated in a demonstration at Davis-Monthan in support of drone whistle-blower Daniel Hale. (Below) 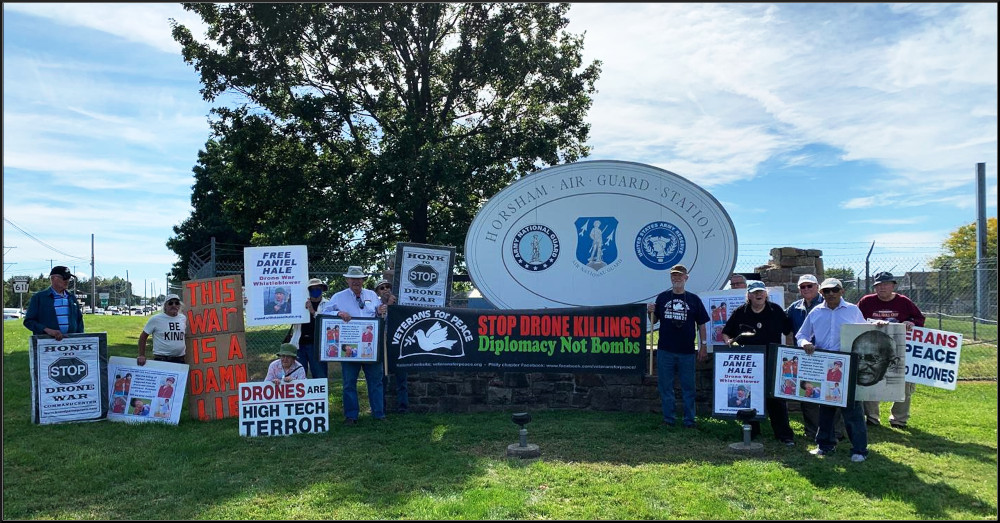 Members of the peace and justice group Concerned Families of Westchester, in Westchester County, NY, handed out these two-sided flyers on September 25th, at its weekly vigil in the downtown of Hastings on Hudson.

On August 29th, a US drone fired a missile in Kabul that killed a suspected ISIS “terrorist” and nine members of his family. Weeks later, the Pentagon stated that the killing was “a tragic mistake.”

As U.S. citizens whose tax dollars went into buying the drone that made that attack, and the missile it fired, the blood of Zemari Ahmadi and his three children, Zamir, 20, Faisal, 16, and Farzad, 10; Ahmadi’s cousin Naser, 30; the children of Ahmadi’s brother Romal: Arwin, 7, Benyamin, 6, and Hayat, 2; and two 3-year-old girls, Malika and Somaya is on our hands.

“Mistake” or not, we know from documents released to the media by drone whistle-blower Daniel Hale that some 90 percent of those killed in US drone attacks in Afghanistan were civilians. (See other side of leaflet.)

Over the last decade, drones have become the preferred US weapon of war. US soldiers are at little risk, and the US population and Congress give the Pentagon a blank check to fight four, five, six wars as long as US casualties low.

Today, in Nevada, Syracuse, NY, and at other drone operating bases across the USA, protests are demanding an end to the use of assassination drones by the Pentagon. Here in Hastings, we join them.

“Serving our community since 2001”
For more information email fbrodhead@aol.com

We ask President Biden to pardon Daniel Hale. Daniel Hale pled guilty to one count of “retention and transmission of national defense information” in violation of the Espionage Act on March 31, 2021. On July 27th 2021, he was sentenced to almost four years in prison.

Daniel Hale is not a spy, a threat to society, or a bad faith actor. His revelations were not a threat to national security.

While the courts have ruled that a defendant’s motive in a case related to the Espionage Act is irrelevant, we recognize that Hale’s motive was only to provide the American people with information about government misconduct. We believe that rather than harm our country, Hale’s revelations actually enhanced our democracy by providing critical information about what our government has been doing in our name. We also believe that Hale’s revelations help push our government to reassess its drone program in light of its violations of US and international law.

In a letter Daniel wrote to his judge explaining why he did what he did, Daniel said “The answer came to me, that to stop the cycle of violence, I ought to sacrifice my own life and not that of another person. So I contacted an investigative reporter with whom I had an established prior relationship and told him that I had something the American people needed to know.”

Daniel being sent to prison sets a terrible example for freedom of speech and sends a message that the American public does not have a right to know about government misconduct. For the right to free speech, and for the enhancement of our democracy, please consider pardoning Daniel Hale.

Members of Upstate Drone Action spent the afternoon of Sunday, September 26th at the Westcott Street Cultural Fair in Syracuse, handing out literature and carrying posters addressing the U.S. drone program in dsolidarity with Shut Down Creech and Stand with Daniel Hale.

Judy Bello, manager of the Upstate website, said: “It was a beautiful afternoon and we handed out hundreds of flyers to receptive festival participants.”

Here is a video of the event by Upstate member John Amidon.

Here are links to flyers used at the event:

UDA Trifold (This has info on Hancock Drone Base & UDA)

On Monday, September 27th, World Can’t Wait (WCW) and Veterans For Peace joined with other justice and peace groups to protest drone attacks at the gate of the Kaneohe Marine Corps Air Station. Carolyn Hadfield, of WCW, reports:

“We had less than a dozen people (at the base gate), but there were lots of motorists leaving the base after their shifts.  Not surprisingly, there wasn’t much support but a few showed very enthusiastic support and one woman came back to thank us saying that it was impossible to say anything opposing drones with anyone she knows and asked how to get involved…Following is a brief summary of what’s happening here.

“Six Reaper drones will be based at Kaneohe Marine Corps Air Station (KBay) as part of the U.S. military restructuring for war with China. The Reaper was designed specifically to give the military and the CIA a “hunter-killer” drone capable of flying long distances. It was a Reaper Drone that killed 10 civilians in Kabul on August 29.   Two have now arrived, are at KBay, and will be part of a month-long Reaper exercise.  World Can’t Wait Hawai`i has joined with other local peace and justice groups to oppose the increasing militarization of Hawai`i and the use of militarized drones.”