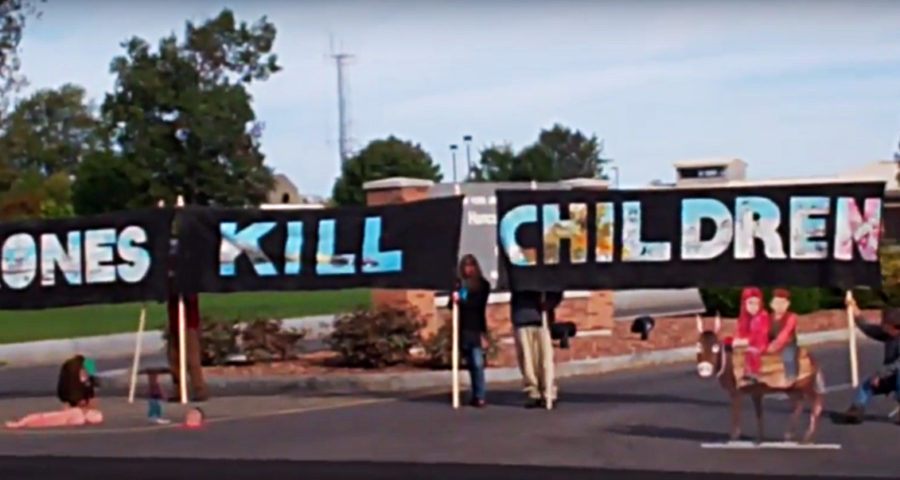 Every first Tuesday of the month since 2010 a handful of us have been protesting the weaponized Reaper drone atHancock Air Base. In milder weather – from April to November – we also protest on third Tuesdays. We call this work, “street heat.”

Why such persistence? Hancock AFB, near Syracuse, our home town, hosts the 174th Attack Wing of the New York Air National Guard. Although its operations and the identities of its drone personnel are classified, several years ago in our local daily the then-base commander bragged that Hancock’s hunter/killer Reaper drones operate over Afghanistan “24/7.” (And we must wonder where else.)

Hancock seems to know that its operations are both illegal and reprehensible. The base, closed to the public, bristles with armed guards. Its commanders have ignored our repeated attempts to communicate with them. Given its attack identify and its attack role, Hancock may be a legitimate target for those whom it attacks. That means those living near the base risk being “collateral damage.”

While seldom thought of as such in the US, abroad the Reaper is seen as an instrument of terror – maiming, assassinating and displacing human beings – mostly in the Middle East and west Asia, mostly in or near the Islamic oil lands. Drone terror contributes to the refugee crisis now convulsing those regions.

Often the drone assassins – or their chain of command – don’t know the names and affiliations of their defenseless targets. It seems the intelligence – whether derived from signals or from client governments and paid informants with their own axes to grind – is often faulty. Sometimes the targets are combatants, offensive or defensive; often however the victims are far from any combat zone. Some are armed males; far too often they are children and women. Frequently these innocents are in the wrong place at the wrong time – sharing with the target the same vehicle or compound or wedding party.

Sometimes when the Reaper’s Hellfire missiles – missiles that dismember and incinerate – strike, the intended target is no longer present or never has been. In a tactic called “double tapping,” those killed are first responders arriving shortly after the attack to aid the wounded or recover the corpses and body parts. Sometimes the missiles are deliberately aimed at those attending the funerals of the casualties of the two earlier strikes – “triple tapping.”

Such drone strikes may be tactically clever; but – as even some high-ranking US militarists argue – strategically they are stupid. Although these pragmatic warriors may or may not respect international law, drone assassination violates and erodes such law. Generally the killing promotes hostility among the survivors toward the US (Can anyone – as in the wake of 9/11 – still wonder, “Why do they hate us?”) And the killing also generates hostility among the victims’ fellow tribespeople… and even among those in other nations horrified by the carnage, cowardice and iniquity of it all.

The killing undermines any efforts by our boots on the ground to win “hearts and minds.” Some other nations and entities are building or importing (usually from Israel) their own drones. Proliferation makes no one safer; one day proliferation will endanger our own leaders and armed forces. US drones are already targeting US citizens overseas. As we keep getting de-sensitized to drone lawlessness and that lawlessness keeps getting normalized, domestic police and Homeland Security may be tempted to target demonstrators, dissenters and minorities.)

We demonstrate outside Hancock on Tuesdays from 4:15 to 5 pm – rush hour. Our handheld signs, in bold, block letters, declare: DRONES FLY, CHILDREN DIE; or TO END TERROR, STOP TERRORIZING; or REAPER DRONES ARE INSTRUMENTS OF TERROR; or STOP HANCOCK WAR CRIME…. Hundreds of vehicles drive past – some drivers and their passengers avert their eyes, some make rude gestures, others honk in support.

But we’re not trying to reach only the public. We especially want those driving on or off the base at shift change to see us. In their controlled environment Hancock personnel surely have little exposure to criticism of drone killing, but our signs are hard to avoid. Maybe our steadfast – year in and year out – presence get drone operators thinking. We’re all about sowing seeds, pricking consciences. We hope that eventually some base personnel will – as the post-World War II Nuremburg Principles require – refuse to follow their illegal orders. Ideally they’ll go public with what they know.

The Pentagon seems to be having a tough time recruiting enough personnel to maintain and operate all the killerand surveillance drones it hopes to deploy. The Pentagon dreams of expanding its drone fleet well beyond its current capacity; it dreams of achieving full spectrum dominance over the world’s skies. Every state or non-state leader, friend or foe, can then feel their vulnerability, thereby muting resistance to the imperium’s demands.

At our monthly and twice-monthly demos we stand directly across East Molloy Road from Hancock’s main entrance and exit. In doing so we exercise our First Amendment right of expression and assembly (which, if unexercised, tends to wither). Once several years ago, exasperated with our presence, Hancock summoned the sheriffs (who seem to know little about the First Amendment). A couple of us were arrested, but even in the hostile DeWitt Town court the charges were dismissed “in the interests of justice.” Since then, during these demos, the police have left us alone – though scores of us have been arrested at other times when, in separate nonviolent actions, we’ve ventured across Molloy Road closer to Hancock’s main gate onto what the base claims is its property. But that’s a whole other story.

Our Tuesdays at Hancock help get us out of our armchairs and “into the street.” Our demos tell the war machine that, whether or not it’s in our name or with our tax money, we don’t tolerate the killing. Arguably, world-wide it’s the street, in crisis after crisis, that might correct regimes straying too far from decency and democracy.

Street heat is one kind of voting that may make a difference. Certainly there would be more impact if more of us participated, whether at Hancock or at other killer drone bases. But even if there were only one of us, s/he would send an essential message. However, if no one is ever there, that absence sends its own – fatal – message: that drone terror is somehow normal (and not cowardly and vile); that the US public is indifferent to killing, indifferent to international law.

Sadly the Hancock drone operatives, some barely out of their teens, allow themselves to become robots – deadly, amoral robots – in a vast imperial, oil-soaked enterprise. Hancock itself is only one of many hundreds of US military bases throughout the US and the planet. Fortunately, though generally ignored by the mainstream media (which rarely dare apply the phrase “war crime” to US military policy), protests like ours occur at various bases operating weaponized drones. Inshallah, such resistance will go viral.

Given that most US Congressional districts have military contracts – whether linked to drone research and development and operations or to other weapons systems – there usually are sites (bases, research centers, factories) nearby to protest. These are opportunities for more of us to get out of our armchairs and into the street.

If our demonstrating can help de-glamorize the drone and diminish drone operator recruitment and re-enlistment, the souls and lives we save will surely be worth the few hours a month we spend exposing the operators’ often naïve complicity.