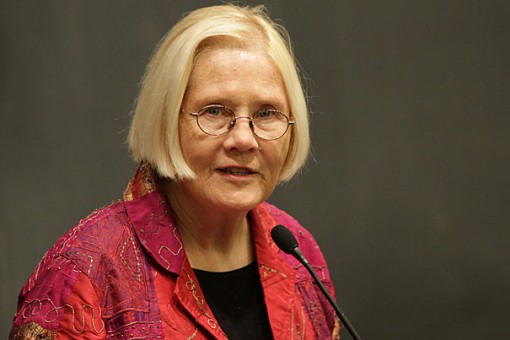 As Grandmother Mary Ann Grady Flores is taken to jail today for violating an “Order of Protection” requested by the Commander of the U.S. National Guard Hancock Drone base, Syracuse, NY, I, as a retired U.S. Army Colonel with 29 years in the US military find it quite embarrassing and ludicrous that a U.S. military commander decided that his personal security so threatened by peaceful, non-violent protesters of the drone policies of the United States that he applied for an “Order of Protection” from the courts—and that the courts issued the “Order” without any evidence that any protester had ever even seen the Commander, much less constituted a threat to him.

I have just returned from South Korea and Okinawa where citizen protesters daily block gates to military bases where highly contentious runways and ports are being built.  Each day police remove non-violent protesters from the gates, but they have never been prohibited from exercising their rights to protest, a right that is under siege by the military and the courts in Syracuse, New York.

As further evidence of how contorted the law enforcement and judicial process in the U.S. is about protests, while armed, white militia hold a federal wildlife reserve in Oregon in protest of the government having too much land and are not even arrested, Mary Ann Grady Flores, a peaceful grandmother who stepped on a double line and therefore violated an “Order of Protection” is going to jail for six months.

The actions by the U.S. military at Hancock drone base and the town courts of DeWitt, New York are blatant measures taken unconstitutionally to silence dissent against the assassin drone weapons policy and intimidate protesters.  They both should be ashamed.