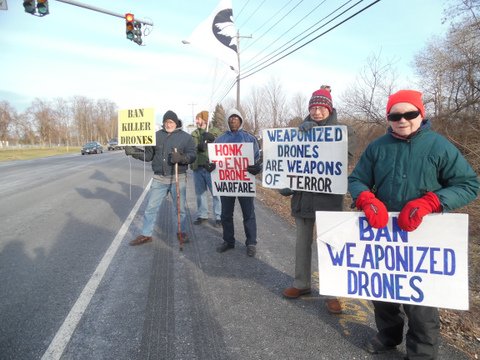 I write hoping you will do all you can to stop the plan of the German government to make Germany into a killer-drone nation like the United States. I understand that this plan, to be voted on in the Bundestag by the end of June, includes immediately leasing weaponized drones from Israel…while at the same time developing a European killer drone.

I also hope that you will do all you can within the Bundestag to remove the U.S. military from bases in Germany. My particular concern is with the base at Ramstein. Ramstein plays a key role in facilitating the U.S. drone war on so many peoples to your east, including in Afghanistan.

Admittedly I know little about political practice and reality in Germany (a country I have fond memories of, having lived on the U.S. military Caserne at Garmisch-Partenkirchen in the early eighties). But I do know that Germany, thanks to its hospitable spirit has become a beacon to many abroad who have lost their homes and land and livelihood. Like many U.S. citizens I am grateful that the Bundestag has been investigating the U.S. drone program in Germany that fuels the global refugee crisis.

We know that the U.S. weaponized drone program afflicting several Mideast and West Asian countries is leading to many non-combatant fatalities. Further, the MQ9 Reaper drone, triumphantly called “Hunter/Killer” by the Pentagon, terrorizes whole communities in the Islamic oil lands. Surely such terror contributes to the flood of refugees from those nations now desperately pressing on the gates of Germany and other nations near and far.

Further I believe that the U.S. drone war, while tactically clever, is strategically counterproductive. Not only is it leading to what I call “defensive proliferation,” but it almost inevitably must lead to enormous ill will toward the U.S. and to the West generally. That hostility will have consequential reverberations –- blowback –for any nation perceived as a U.S. ally.

Surely a German killer/drone program would also cause untold non-combatant fatalities and would generate hatred for Germany in the targeted regions.

You may well ask: who is this Ed Kinane who presumes to address you? In 2003 I spent five months in Iraq with  Voices in the Wilderness (a mostly-U.S. NGO, now suppressed). I was in Baghdad before, during and after the several weeks of “Shock and Awe.” I know firsthand the aerial terrorism of the Pentagon’s overseas interventions and invasions.

In 2009 when I learned that Hancock Air Force Base – almost within walking distance of my home in Syracuse, New York – was becoming a hub for the MQ9 Reaper drone attacks in Afghanistan, I was shaken. Along with others here in Upstate New York I felt that if we (who live nearby this hub for the 174th Attack Wing of the New York National Guard) don’t speak out against this shameful, cowardly, illegal, inhumane way of waging warfare, who else would?

In its public relations efforts to win over the local civilian community, the then Hancock commander bragged in our local daily newspaper (the Syracuse Post-Standard, www.syracuse.com) that Hancock remotely pilots weaponized Reapers over Afghanistan “24/7.” It’s likely that the Hancock Reaper may also attack targets in North Waziristan (if not elsewhere) as well.

In 2010 here in New York State grassroots activists formed the Upstate Drone Action (sometimes also known as Ground the Drones and End the Wars Coalition). We were keenly aware that, according to the post-World War Two Nuremberg Principles, we each – especially those among us who paid federal taxes – bore responsibility for the actions of our government. Hardly being in a position to physically impede the Pentagon’s predations on other countries, we realized that at least here we could help expose those actions to the general public…and help awaken the consciences of Hancock personnel. These personnel typically are very young and live within a military cocoon, cut off from direct communication with us.

Via conventional activist tactics – rallies, leafleting, letter and article writing, street theater, vigiling, lobbying our Congressional representatives, multi-day marches, etc. – Upstate Drone Action has sought to share our distress with the public. Since 2010 a handful of us have vigiled across the road from Hancock’s main entrance at the afternoon shift change on the first and third Tuesday of every month. In the years since 2010 we have also blocked Hancock’s main gate a dozen or so times.  Our scrupulously nonviolent blockades have led to my own and roughly 200 other arrests. These have led to many trials and some incarcerations.

Upstate Drone Action has not been the only grassroots group protesting U.S. drone warfare. Similar, mutually inspiring campaigns have been mounted at Beale Airbase in California, Creech Airbase in Nevada, and other bases across the U.S. With a kind of relentless persistence these direct actions keep recurring despite police and judicial attempts to deter us.

Let’s be clear: what we do isn’t civil disobedience, but rather civil resistance. After all, we aren’t disobeying the law; we seek to enforce the law. In many of our direct actions we attempt to present “People’s Indictments” to the base. In these documents we cite not only the Nuremburg Principles, but also the U.N. Charter and other international law and treaties that the U.S. has signed. We also cite Article Six of the U.S. Constitution which declares that these treaties are the highest law of our land. Those among us religiously motivated also cite the commandment, “Thou shalt not kill.”

Having lived and worked in Islamic lands, I am also motivated by what I perceive is the Islamophobia of U.S. military policy – akin to the racism that so plagues our civilian society. Currently, the primary target of U.S. aerial terrorism is the people and communities and regions identified as Islamic.

I could cite statistics regarding the untold victims of drone attacks. I couldcite the number of those attacks – steeply escalating with each new U.S. president (Bush/Obama/Trump). I could provide estimates of the millions of refugees displaced from not only their communities, but from their nations. Frankly such numbers leave me numbed. I cannot fathom them.

Instead, with apologies for not writing to you in German, let me cite just one text among many (see attached bibliography of English language sources) that have helped shape my understanding of the drone scourge: the Stanford and New York Universities’ 165-page, “Living Under Drones: Death, Injury, and Trauma to Civilians from US Drone Practices in Pakistan” (2012). I encourage you to seek out this deeply human yet rigorously documented report at http://livingunderdrones.org/.

I write to you today, not only with urgency, but with desperation. Too many U.S. people — and their Congressional representatives, regardless of party — see the U.S. drone wars as somehow making the U.S. safer. In fact the opposite is true. My hope is that Germany will not follow the Pentagon’s lead and that Germany will end its current collaboration with that entity’s global war of terror. Any nation, especially a highly nuclearized superpower, possessing the means to assassinate any person and any leader anytime, anywhere only increases global precarity and undermines its own national soul. That nation does not need allies who facilitate its barbarity.