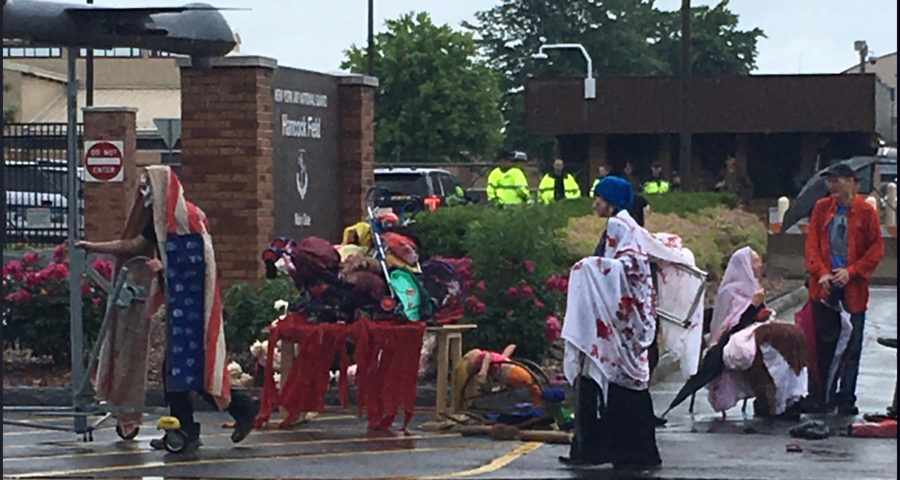 Shortly before 8 a.m. on Thursday, June 20, our Upstate Drone Action caravan of six or seven vehicles arrived, unannounced, at the main gate of Hancock AFB in De Witt, a suburb of Syracuse, New York. Two of us – accompanied by one of our videographers – proceeded to the guardhouse 50 yards in from East Molloy Road to read aloud and deliver a statement (below). The statement called on base personnel, in accordance with U.S. and International Law, to refuse to obey their chain of command’s illegal orders to commit what are ongoing drone war crimes.

Simultaneously we set about creating a street theatre tableau blocking the main entrance to the base. As we have many times over the past decade, we were calling out Hancock for hosting the 174th Attack Wing of the NY National Guard. The 174th remotely pilots missile-spewing robotic MQ9 Reaper drones over Afghanistan (and probably elsewhere). These classified operations result in the terrorizing, maiming and killing of uncounted and uncountable numbers of  unarmed and undefended  children and their parents.

Until our arrest about two hours later, we held an unadorned, white 3×8-ft. banner across the driveway leading to the gate. In bold black letters, it read:

Nearby, also in the ingress, two grandmothers in traditional black dresses silently sat grieving, holding “infants” in bloodied swaddling clothes. Bloodied “body parts” and children’s toys and things were strewn about. Crossing back and forth between the banner and the road, pushed by a man in a cape and death’s mask, a model Reaper on wheels fleshed out the tableau.  Across the road from base property, over a dozen supporters, singing and chanting, held signs like: CHILDREN ARE NOT “COLLATERAL DAMAGE.”

We were handcuffed, separated by gender and taken in two paddy wagons to the sheriffs’ north station where we were held in three small cells. After a couple hours we were transported by van to the downtown Syracuse “Justice Center.” In booking we were ordered strip, spread our cheeks, and where applicable, lift our scrotums. Our street clothes were put in a device for what seemed to be some chemical inspection and replaced with jail issue.

We were held in a chilly, dirty holding cell with other inmates all day. In the early evening we separately appeared before a Judge Murphy. Public defenders pled us not guilty. The assistant D.A. recommended we be ROR’ed and, released on our own recognizance, without bail. After being taken back to the holding cell, we were released – to the welcoming arms of support people and fellow perps –  sometime after 10:30 p.m.

Five of us — LB, DB, TJ, EK, RK —  must appear in the DeWitt town night court at 6 p.m. Tuesday, June 25;  JO, AT & MS-C. must appear June 26, also at 6 p.m. We were each charged with two violations — trespass and disorderly conduct, and with a misdemeanor, obstruction of government administration (OGA). Thus far Hancock’s crimes against humanity go insufficiently exposed.

Thanks to our videographers our entire action was live-streamed. The arrest appeared on YouTube. The next morning brief footage appeared near the top of Amy Goodman’s “Democracy Now” news hour viewed by hundreds of thousands here and abroad. For a three-minute overview, check out: