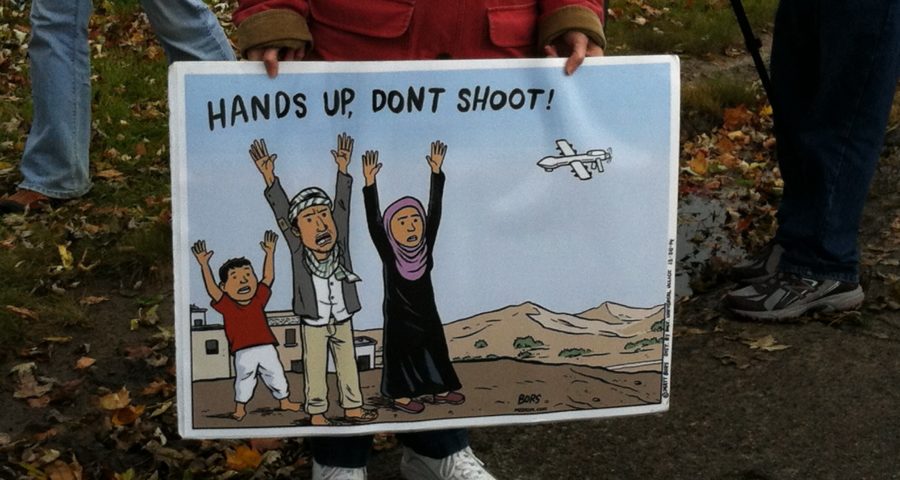 Terrorism is Killing or Instilling Fear – No Matter Who Does It

We watch proliferating terror and violence. . . Mourning and fear come too. What’s the remedy? More of the same?!

Peacemakers on retreat were playing a game where the caller, standing in the middle of a circle of seated people says, “The Big Wind Blows on anyone who . .” All for whom it’s true – including the caller – must find another seat. The person left standing is the next caller.

My friend said, “The Big Wind Blows on anyone who has ever been part of a Terrorist Organization.” I was shocked. Why did he ask that? And was the room bugged? Would the FBI, who bugs peace groups, think that meant we’re terrorists? Why would he ask that?

Since I wasn’t the only confused-looking person, he said, “Well, I was part of a terrorist organization: the U.S. military.”

The Buffalo News said in its December 4 headline story “Massacre again raises question of when to define it as terrorism,”

Terrorism is killing and/or instilling fear. Let’s kill the people who are killing people? Which causes more people to kill? How can that work? It doesn’t make sense. (Don’t hit your sister. Whap!!) Restraining and preventing aggression is necessary. Instilling fear and Islamophobia promote a police state.

State terrorism is still terrorism, and like violence, Terrorism begets more Terrorism. In fact, besides our government’s above-described intimidation of civilian populations, the U.S. efforts to influence other governments’ policies and/or affect their conduct are well known worldwide. The Project for the New American Century espoused our challenging policies or conduct of other governments that are not aligned with our interests and prominence.

Do we need more or less violence? Hope we can agree we need less.

We need faith, courage, and resolute adherence to principle. Let’s work cooperatively, fearlessly, to mainstream nonviolence, including petitioning our government. You can join organizations like the WNY Peace Center and allies on specific campaigns.

Victoria Ross, QCSW, LMSW, MALD, is the Executive Director of the WNY Peace Center, a consultant for the Interfaith Peace Network, and Holy Trinity Lutheran Church’s delegate to the Network of Religious Communities (all cosponsors of the Solidarity Rally along with Muslim Public Affairs Council, and 40 other groups).